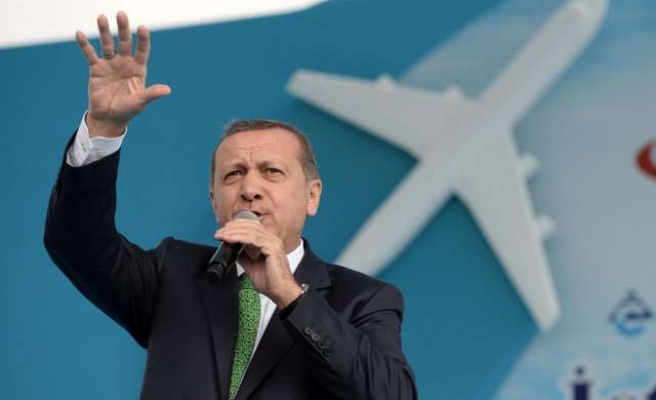 A groundbreaking ceremony for Istanbul's third and the world's biggest airport has been held on Friday.

With its 90-million-passenger capacity, parking zone broad enough for 500 planes and 76-million-meter-square area, the airport will be the largest in the world and the biggest transfer hub in Europe.

Prime Minister Recep Tayyip Erdogan, along with a large entourage of ministers, businessmen and local governors, was ready at the site.

"We are not just building an airport, we are actually building a victory monument," Erdogan told large crowds who gathered for the ceremony in the remote Arnavutkoy neighborhood of Istanbul.

Istanbul's two airports, currently operational, were visited by a total of over 70 million passengers in 2013, revealing capacity issues as the number continued to rise.

Erdogan said a first part of the airport to hold 90 million passengers would be launched on October 29 of 2017, marking Turkey's 94th Republic Day.

The airport will be connected to the city center through a new highway, the upcoming third bridge on Istanbul strait, and railway systems.

The Cengiz-Kolin-Limak-Mapa-Kalyon Consortium, a joint venture of Turkish companies, had won a tender for the third Istanbul airport in May 2013, promising to pay the state 22.1 billion euros, plus taxes, to run the airport over a 25-year period starting in 2017.

The airport will also act as a focal point for the Turkish Airlines, Turkey's flag carrier, which is one of the fastest growing airline companies, flying currently to 208 international destinations.

The new airport is planned as a large complex including four separate terminal buildings connected via a rail system, eight control towers, six airfields for all kinds of airplanes, sixteen taxi roads, a 6.5 million square meter apron, cargo and general aviation terminal, a parking garage with capacity for around 70,000 cars, medical aviation center, hotels, and a congress center.