HRW said the refugees, living in their cars after fleeing the ISIL onslaught in Syria, were stuck in the minefield because Turkey had refused entry for vehicles and livestock 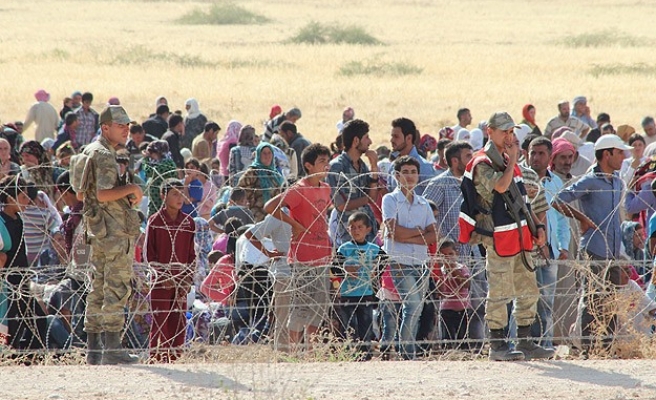 A human rights watchdog urged Turkey on Wednesday to remove from its border with Syria landmines which have killed three people and wounded nine among more than 2,000 Syrian refugees camped in a minefield.

Human Rights Watch (HRW) said the refugees, living in their cars after fleeing the ISIL onslaught in Syria, were stuck in the minefield because Turkey had refused entry for vehicles and livestock, and they did not want to abandon their belongings.

Turkey reported that its military laid more than 600,000 mines along the Syrian border between 1957 and 1998 to prevent illegal border crossings, HRW said.

"To fall victim to a landmine after losing your home and fleeing your country is a fate no one should have to endure," HRW arms director Steve Goose said in a statement.

Since fighting between Kurdish forces and ISIL militants began in September around the Syrian border town of Kobani, thousands of Syrians have fled into Turkey through a narrow strip of mined land along the border, known as the Tel Shair corridor, the watchdog said.

There have been at least 70 mine explosions in the area over the last two months, it said, citing aid workers as saying a mine exploded every two to three days, triggered by fleeing civilians or livestock.

One victim, Selma, whose home was destroyed by ISIL, was carrying her one-year-old son across the border, with her seven-year-old daughter clutching her dress, when she stepped on a mine.

Her daughter suffered first degree burns on her face, and aid workers took Selma to a Turkish hospital where doctors amputated her left leg.

Selma, a farmer and mother of six, told HRW she had seen no signs warning that there were landmines in the area.

Of the deaths and injuries reported by HRW, the majority were youngsters aged between five and 15, it said.

In its annual Landmine Monitor report issued on Wednesday, the International Campaign to Ban Landmines and Cluster Munition Coalition (ICBL-CMC) said the number of recorded casualties of mines and other explosive remnants of war had fallen to its lowest level since 1999, but the number of child victims had risen.

In 2013, children made up almost half of the 2,403 civilian landmine casualties worldwide whose age was known, 7 percent more than in 2012, and HRW researcher Mark Hiznay said child refugees in the Tel Shair corridor were at particular risk due to their family responsibilities.

"Families expect their children to shepherd the livestock, find places to graze and collect materials to start fires," Hiznay told the Thomson Reuters Foundation by phone.

Hiznay said Turkey, which joined the Mine Ban Treaty in 2003, requiring it to destroy all mines, should clear its minefields immediately to avoid further harm.