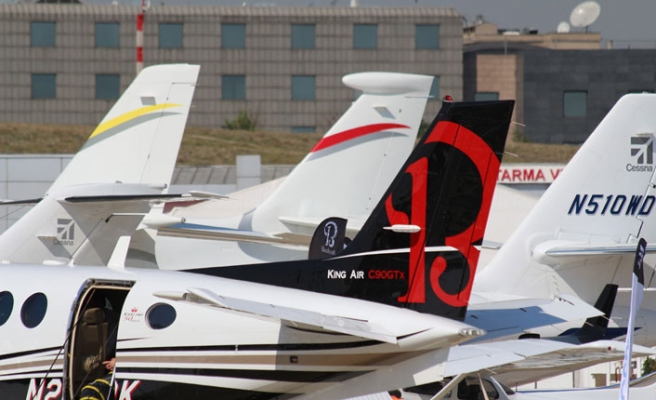 The Turkish civil aviation boasts about 200,000 employees and a turnover of about $20 billion, Turkey’s vice president, Fuat Oktay, said Thursday at the opening ceremony of Istanbul Airshow 2018, the 12th International Civil Aviation and Airports Exhibition.

The four-day Istanbul Airshow 2018 hosts more than 150 companies and over 40 aircraft in the exhibition.

Oktay said the airshow -- which, in 1996, only had two aircraft -- has come a long way and plays an important role in gathering the players of the global aviation industry.

Oktay added: "Our country holds an important role as leader for aviation and airport industries in Eurasia."

He noted that achievements along with new technology developed in the military field should synergize with developments in civil aviation.

The vice president stressed the importance of Istanbul's new airport, which is to become one of the three largest in the world.

The new airport, in its first phase, is set to be completed on Oct. 29. It is expected to welcome 90 million passengers annually.

Once complete, the new airport will offer flights to more than 300 destinations with an annual passenger capacity of up to 200 million.

Oktay also praised Turkey's national flag carrier Turkish Airlines, which managed to grow from 60 destinations in 50 countries in 2003 to over 300 in 120 countries today.

The Istanbul Airshow -- be held between Sept. 27 and 30 -- is the "single civil only aviation show" in Eurasia, according to its website.