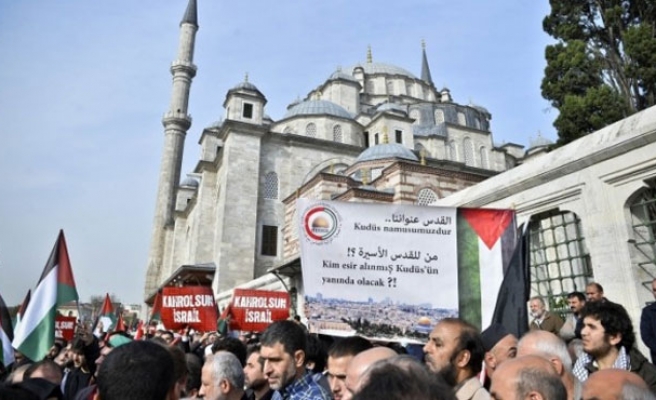 Pro-Palestinian activists chanted slogans and raised flags following Friday prayers in Istanbul as part of nationwide protests over an Israeli security forces raid on the Al-Aqsa Mosque compound in Jerusalem.

Around 1,000 protesters gathered in the yard of Istanbul's Fatih Mosque, condemning what they called "Zionist aggression on the holy temple."

Israeli security forces had raided the Jerusalem mosque and fired tear gas canisters and rubber bullets Wednesday following clashes with Palestinian protesters. The mosque is located on a site holy to both Jews and Muslims in the divided city.

Tension was already high in East Jerusalem due to the closure of the Al-Aqsa compound to Palestinians after an extremist rabbi, who had called for the compound to be liberated from "Islamic occupation," was shot and wounded.

Palestinians were further outraged as Israeli police shot dead a Palestinian man who was claimed to have been been a suspect in the shooting.

Wednesday's raid was first since 1967, when the Israeli army occupied the city.

For Muslims, Al-Aqsa represents the world's third holiest site. Jews refer to the area as the ‘Temple Mount,’ claiming it was the site of two Jewish temples in ancient times.

Demonstrations against the incursion also took place in many other Turkish provinces led by NGOs and activist groups in solidarity with Palestine.