More than 130,000 Syrian Kurds, driven by fear of ISIL, have fled its advance, many crossing the border into Turkey. 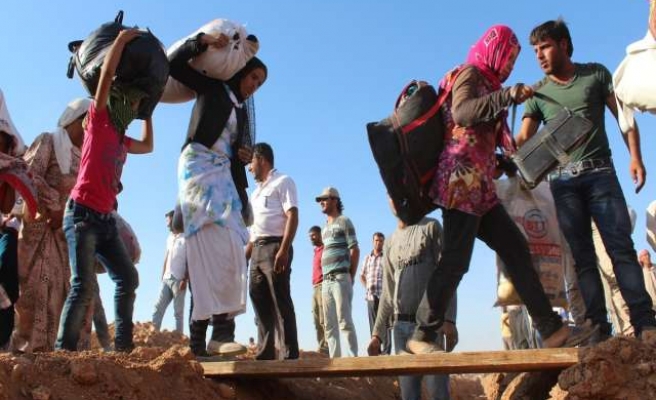 More than 130,000 Syrian Kurds fleeing an advance by ISIL militants have crossed into Turkey in the past three days and the authorities are preparing for more, Turkish Deputy Prime Minister Numan Kurtulmus said on Monday.

"We are prepared for the worst scenario, which is an influx of hundreds of thousands of refugees," Kurtulmus told reporters in the capital Ankara.

Syrian Kurdish fighters have halted an advance by ISIL fighters to the east of a predominantly Kurdish town near the border with Turkey, a spokesman for the main armed Kurdish group said.

"Fierce clashes are still under way but the ISIS (ISIL) advance to the east of Kobani has been halted since last night," Redur Xelil, spokesman for the main Kurdish armed group, the YPG, said via Skype.

He said the eastern front was the scene of the fiercest fighting in the offensive launched by ISIL last Tuesday on Kobani, also known in Arabic as Ayn al-Arab.

The Syrian Observatory for Human Rights, which tracks violence in the Syrian war, said ISIL fighters had made no significant advance in the last 24 hours.

The offensive is ISIL's second attempt to take Kobani since June, when it staged a lightning advance across northern Iraq, seizing the city of Mosul and with it Iraqi weaponry including American-made hardware that the Syrian Kurds say is now being used against them.

The previous attack on Kobani, in July, was fought off with the help of Kurds who crossed the border from Turkey. Xelil said hundreds had crossed from Turkey again to help repel the current offensive.

"There have been no reinforcements apart from some Kurdish youths from Turkey," he said.

The United States has launched air strikes against ISIL in Iraq and has said it will not hesitate to strike the group in Syria, but wants allies to join its campaign.

The United Nations said on Sunday the number of Syrian Kurds who had fled into neighbouring Turkey alone might have topped 100,000 and was likely to go much higher.

"There are still clashes to the west and south of Kobani but not at the same intensity as the eastern front," Xelil said.

Rami Abdulrahman, who runs the Observatory, said ISIL had made "no progress worth mentioning" in the past 24 hours, but that clashes were "at their most intense".

There were conflicting accounts of how far ISIL fighters were from Kobani. Xelil said they were 20-30 km (12-19 miles) away, while Abdulrahman said they were around half that distance from the town.