2,600 Ahiska Turks were brought to Turkey over two years, according to Erzincan's lieutenant governor 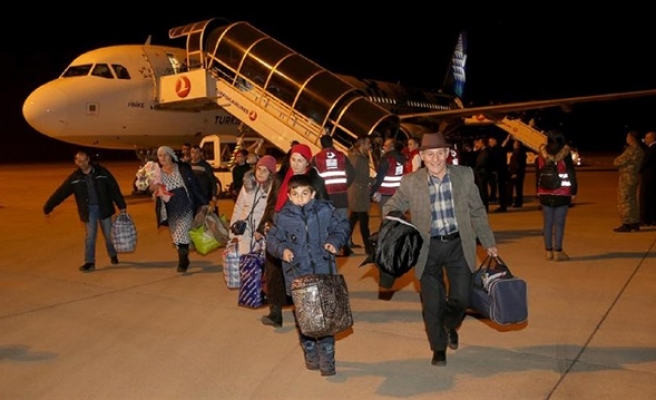 The last group of Ahiska Turks, who were forced to migrate from the Caucasus during the Soviet era, returned to their homeland Thursday.

With President Recep Tayyip Erdogan’s instruction and Prime Minister Binali Yildirim’s coordination, the sixth and the last group of Ahiska Turks were brought from Ukraine to Uzumlu district in Turkey’s eastern Erzurum province.

The first group of Ahiska Turks, also known as Meskhetian Turks, came to Turkey on Dec. 25, 2015.

Since then, 2,600 Ahiska Turks have been brought to Turkey, according to Fatih Acar, Erzincan's lieutenant governor.

One of the Ahiska Turks who arrived with the first party, Kazim Iskenderov, expressed his excitement and happiness about coming home.

“My grandchildren will grow up in their homeland,” he added.

Another Ahiska Turk, Zekeriya Afrova, said they have always hoped to come to Turkey.

They also faced discrimination and human rights abuses before and after the Soviet deportation. Those who migrated to Ukraine in 1990 settled in shantytowns used by seasonal workers.

The majority of Ahiska Turks in Ukraine fled their homes during the 2014 conflict between Ukrainian forces and pro-Russian separatists in eastern Ukraine.

Turkey has voluntarily accepted thousands of Ahiska Turks and granted citizenship to 585 of them so far.