All actors in Syria know that they cannot ignore Turkey in resolving issue, says foreign minister 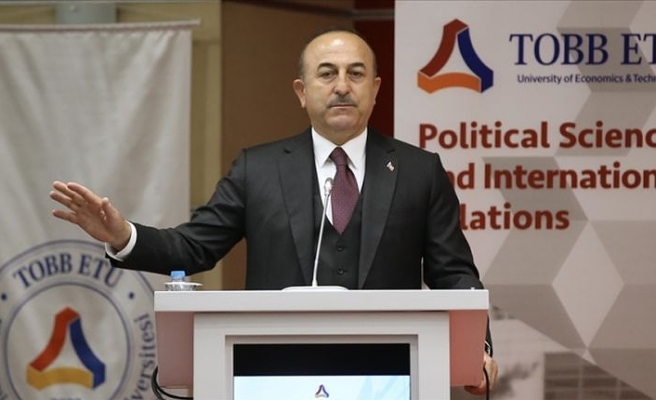 Some 70 million people are displaced today worldwide due to wars and conflicts, more than during World War II, said Turkish Foreign Minister Cavusoglu on Wednesday.

Speaking to students, scholars, and the media at a conference organized by TOBB University in the capital Ankara, Cavusoglu addressed a wide array of issues.

Cavusoglu said that many conflicts that the world faces today are turning into “frozen conflicts,” citing the examples of the Cyprus issue and Crimean crisis.

On the war in Syria, Cavusoglu said that all actors in Syria, whether they like Turkey or not, know they cannot ignore Turkey in resolving the Syrian issue.

"Although we achieved some success in stabilizing some parts of Syria, we’re still not too close to a permanent solution," said Cavusoglu.

Taking questions from the audience, Cavusoglu stressed the importance of integrity in foreign policy and called on all countries to avoid double standards in the fight against terrorism and Islamophobia.

Cavusoglu also said that Europe stepped up efforts against terrorist organizations such as the PKK and Daesh only when those groups started carrying out attacks and assaults on their soil.

The PKK -- listed as a terrorist organization by Turkey, the U.S. and the EU -- has waged a terror campaign against Turkey for more than 30 years, resulting in the deaths of nearly 40,000 people.

Cavusoglu added that Organization of Islamic Cooperation (OIC) needs to be reformed if it wants to have more say on global issues, adding that Turkey intends to initiate a reform process during its current presidency of the bloc.

On the Cyprus issue, Cavusoglu said that despite the positive efforts of Turkey and the Turkish Cypriots, the parties have been unable to achieve a permanent solution to the longstanding conflict due to the negative stance of the Greek Cypriots and EU countries.