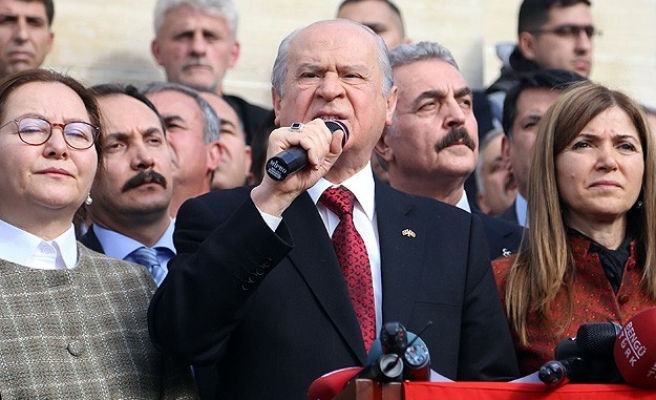 Turkish Nationalist Movement Party leader Devlet Bahceli paid his first visit to the eastern province of Tunceli on Friday amid calls from non-governmental organizations warning him not to come due to his controversial remarks on the 1937 Dersim massacre.

More than 14,000 civilians, the majority of them from the Alevi religious community, were killed in a military offensive in the Dersim province following a rebellion against the then-government's resettlement policies 67 years ago. Dersim is now known as Tunceli province.

As Bahceli arrived in the provincial center protesters took to the streets and an angry group rallied on a street close to the Tunceli Governorate. Police used tear gas to disperse demonstrators.

Bahceli's arrival came three days after Prime Minister Ahmet Davutoglu challenged him to pay a "gallant" visit to the province during his Justice and Development (AK) Party's group meeting on Tuesday, asking Bahceli to repeat his remarks in front of the people there.

Bahceli, in his remarks on Tuesday's MHP group meeting, criticized the current Turkish government's stance over the Dersim massacre and said an official statement about the massacre was akin to apologizing to the outlawed Kurdistan Workers’ Party, or its imprisoned leader, Abdullah Ocalan.

The MHP leader also described those executed in the massacre as “terrorists”, prompting an angry reaction from the people of Dersim who said they did not want the nationalist politician to visit their homeland.

Davutoglu said the government was ready to apologize for the incidents in the name of the state and to correct, if any, mistakes. In addition, in November 2011, then prime minister Recep Tayyip Erdogan also said: "If there is a need for the Turkish state to apologize, I will apologize and I am apologizing."

Earlier on Monday, main opposition Republican People's Party leader Kemal Kilicdaroglu also issued a statement on the massacre and said it was necessary to discuss and clarify the incidents.

Bahceli reiterated his remarks in his address in the province, saying: "The incidents taking place in 1937-1938 are a revolt and those who were involved in are terrorists of that period."

“Religion, nationality, sect, identity and ethnic origin of any terrorist will be viewed as irrelevant."

Several NGOs strongly condemned the nationalist leader and urged him to apologize on his remarks which they said were "excessive".