No agreement on use of Turkish bases, air space with U.S.

Turkish and U.S. cooperation is likely to focus on strengthening Syria's moderate opposition, with the first group of fighters expected to start training in Kirsehir in months. 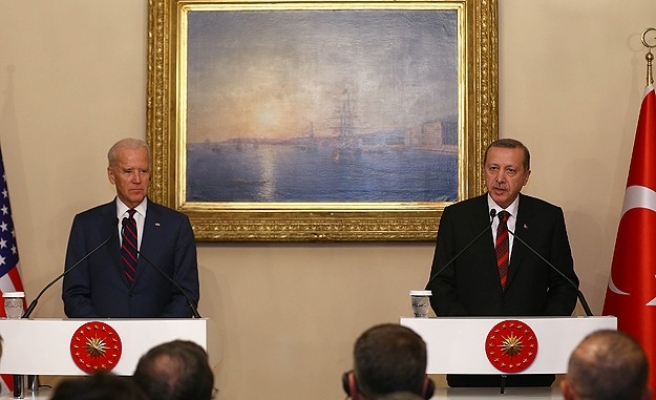 Turkey and the United States smoothed over some differences in the fight against ISIL during a weekend visit by U.S. Vice President Joe Biden, but the talks heralded little in the way of deeper military cooperation between the NATO allies.

Turkey has been a reluctant partner in the U.S.-led coalition against ISIL, refusing to take a frontline military role despite its 1,200 km (750-mile) border with Iraq and Syria and thereby intensifying Western concern that it is a weak link in the struggle against the insurgents.

Biden ended two days of meetings in Istanbul with no guarantee that Turkey would step up its military cooperation by, for example, allowing the use of Turkish air space or a U.S. base in its southern town of Incirlik for coalition air strikes.

Turkish leaders, in turn, received no signal that their demands for Syrian President Bashar al-Assad's removal from power or that Washington establish a no-fly zone in Syria would be met.

But officials on both sides said the differences were more about strategy than objectives, and the meetings - including a four-hour discussion between Biden and Turkish President Tayyip Erdogan - had been an opportunity to clear the air and set a sometimes acrimonious relationship on a surer footing.

"They didn't sit there and sign their names on the bottom line on a whole host of agreements. But actually, I think we came to a much greater clarity about where we need to go from here," a senior U.S. official said following the talks.

Ankara and Washington were in "complete agreement" on the threat from ISIL, the official said, as well as the need for an effective ground force in Syria to work in coordination with the air strikes and push the insurgents back, building on progress made in Iraq.

Turkish and U.S. forces will train 2,000 moderate Syrian rebels at a base in the central city of Kirsehir as part of the plan, a Turkish Foreign Ministry official said.

Turkish soldiers have also already trained some 230 Kurdish peshmerga fighters in northern Iraq and will give similar assistance to a new national army unit in Baghdad in support of the government's struggle against ISIL.

"In Iraq, Ankara and Washington's viewpoints are very much closely aligned. The problem remains Syria, where strategically they want the same thing - a new order without Assad - but technically, divergences remain," said Sinan Ulgen, head of the Centre for Economic and Foreign Policy Studies in Istanbul.

Those divergences centre around the urgency to remove Assad.

Turkey argues there can be no peace while he remains in power, and that his forces will simply fill the void left as the U.S.-led air strikes push ISIL back.

Washington argues that while Assad has lost legitimacy and must ultimately leave power, fighting ISIL is the priority. Its reluctance to confront Assad, who is backed by Iran, is compounded by the fear of scuppering negotiations over Tehran's disputed nuclear programme, analysts say.

Iran and six Western powers - the United States, Britain, Russia, China, Germany and France - failed for a second time this year on Monday to resolve their 12-year dispute over Tehran's nuclear ambitions.

"The political expediency of a deal with Iran will overshadow U.S. aggressiveness on Syria ... There is a new-found understanding in Ankara about this," Ulgen said.

Turkey's proposal for a buffer zone inside Syria, a safe haven for refugees which would need to be protected by a no-fly zone, is therefore unlikely to gain much traction, as it would put the coalition in direct confrontation with Assad.

Turkish and U.S. cooperation is likely instead to focus on strengthening Syria's moderate opposition, with the first group of fighters expected to start training in Kirsehir in months.

U.S. officials said there would need to be close vetting criteria to ensure that those receiving training were genuine moderates who would not end up joining radical groups.

There are also differences over the objectives of the training, with Turkey insisting the rebels should fight Assad as well as the insurgents, while Washington wants the focus to remain squarely on ISIL.

But the U.S. official pointed to progress in Iraq and the Syrian border town of Kobani, where Kurdish peshmerga fighters and moderate Syrian rebels have leveraged U.S. air strikes to gradually roll back an ISIL siege.

"We're starting to see on the Iraqi side in particular, also to some degree in Kobani, that when we have local forces who are well organised ... and can be backed up by American air power, they can actually do some real damage to ISIL," the U.S. official said.