On his way back to Rome after Turkey visit, the pontiff condemned ISIL, said understands why Muslims are offended by stereotype and voiced hope for opening of Turkey-Armenia border which has remained closed for two decades. 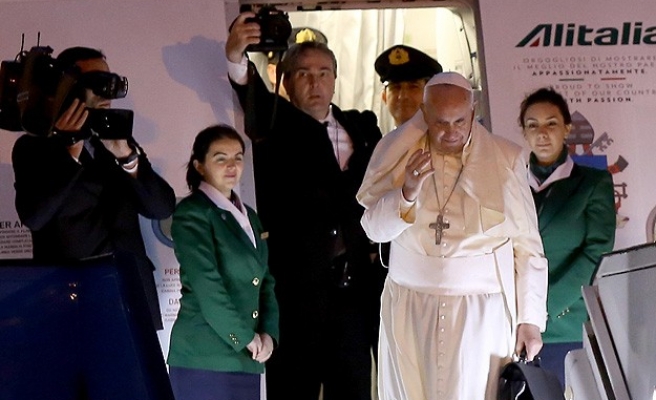 Pope Francis voiced hope late on Sunday for the opening of Turkey-Armenia border as a sign of mending ties, he reportedly said during his flight back to the Italian capital Rome after his three-day visit to Turkey.

According to a report by the Catholic News Service, Francis praised Turkish President Recep Tayyip Erdogan’s statement in 2013 regarding the 1915 incidents as an “outstretched hand,” and expressed his hope that the border gates, which have remained closed over the last two decades, would open.

Turkey closed its border with Armenia in 1993 following the escalation of the latter’s conflict with Azerbaijan over the Nagorno-Karabakh region.

"Wrong to equate Islam with violence"

Pope Francis also said that equating Islam with violence was wrong and called on Muslim leaders to issue a global condemnation of terrorism to help dispel the stereotype.

Francis, the leader of 1.2 billion Roman Catholics, told reporters aboard his plane returning from a visit to Turkey that he understood why Muslims were offended by many in the West who automatically equated their religion with terrorism.

Francis' predecessor, Benedict XVI, caused storms of protest throughout the Islamic world in 2006, when he made a speech that suggested to many Muslims that he believed Islam espoused violence.

Benedict said he had been misunderstood and apologised.

The Argentine pope said it was wrong for anyone to react to terrorism by being "enraged" against Islam.

Francis said he had made the suggestion of a global condemnation of terrorism by Islamic leaders in talks on Friday with Turkish President Tayyip Erdogan.

"I told the president that it would be beautiful if all Islamic leaders, whether they are political, religious or academic leaders, would speak out clearly and condemn this because this would help the majority of Muslim people," he said.

Pope urged the international community to support Turkey on its response to Syrian and Iraqi refugees during meeting with displaced youth and children who are helped by Turkish Salezy community at Cathedral of the Holy Spirit (St. Esprit Cathedral) in Istanbul’s Harbiye neighborhood and expressed gratitude to Turkey for extending a helping hand.

Pope Francis emphasized that many of the displaced Syrians around the world are living in intolerable conditions, and called for immediate assistance from the international community before it’s too late.

Addressing the cathedral, the pope gave advice to young people saying that they should not give in to desperation despite the difficulties and obstacles, and should continue to hope for a better future.

The Salezy Christian community based in Istanbul assists more than 600 people, including displaced Syrians, Iraqis, African Christians and Muslims.