In a rare meeting in Istanbul the holy leaders of Catholic and Orthodox communities jointly presided feast service of St. Andrew the Apostle, who is the founder of the Orthodox Church. 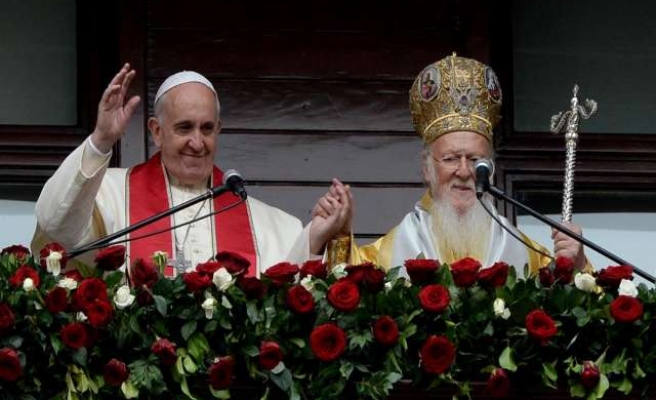 Pope Francis said militants were carrying out a "profoundly grave sin against God" in Syria and Iraq, calling on Sunday for inter-religious dialogue and action against poverty to help end conflicts there.

The pope spoke on the last day of his weekend trip to Turkey, which is sheltering nearly 2 million refugees from Syria, thousands of Christians among them.

At a joint service with Patriarch Bartholomew I, spiritual head of the world's 300 million Orthodox Christians, Francis said people of all faiths could not remain indifferent to the cries of the victims of the "inhumane and brutal" war next door.

"Taking away the peace of a people, committing every act of violence - or consenting to such acts - especially when directed against the weakest and defenceless, is a profoundly grave sin against God," he said during the service.

The pope also condemned Friday's attack on Muslim worshippers at the main mosque in northern Nigeria's biggest city, Kano, in which at least 100 people were killed.

The pope said stopping poverty was key partly because it gives rise to "the recruitment of terrorists". He has said that while it is lawful for the international community to use force to stop an "unjust aggressor," a lasting solution must be found.

Catholic and Orthodox churches’ spiritual leaders signed a "Common Declaration," on Sunday in an attempt to forge stronger ties between two communities and called for interfaith dialogue.

The two leaders emphasized the importance the declaration for "Christian unity and momentous impact on the suffering of Christians in the Middle East."

"We cannot resign ourselves to a Middle East without Christians, who have professed the name of Jesus there for two thousand years. Many of our brothers and sisters are being persecuted and have been forced violently from their homes," said a press release from the Greek Fener Orthodox Patriarchate.

"We also recognize the importance of promoting a constructive dialogue with Islam based on mutual respect and friendship."

"Inspired by common values and strengthened by genuine fraternal sentiments, Muslims and Christians are called to work together for the sake of justice, peace and respect for the dignity and rights of every person, especially in those regions where they once lived for centuries in peaceful coexistence and now tragically suffer together the horrors of war."

The declaration was signed after the Divine Liturgy to commemorate the Feast of St. Andrew the Apostle.

Bartholomew became the first Orthodox patriarch to ever attend a papal inauguration ceremony since the split between the two churches when he took part in the coronation of Pope Francis last year in Vatican.

The leader of the world's 1.2 billion Roman Catholics prayed in Istanbul's most famous mosque on Saturday and has used the trip to reach out to Muslims to oppose the conflict in neighbouring countries.

"Pope Francis wants to align the Catholic Church with moderate Muslims, in order to encourage them to resist what he has called fanaticism and fundamentalism," said John Allen, author of numerous books about the Vatican and associate editor of the U.S. Catholic website Crux.

"In part that's a broad concern for dialogue and world peace, in part a specific defence of embattled Christians."

Father Claudio Monge, an Italian Catholic priest in Turkey for 12 years who is involved in Christian-Muslim dialogue said: "The message is that those who use God as a pretext for violence cannot be a true believers. Those who have ears to hear will understand. He is appealing to true believers."

During the second day of his visit, Pope Francis and Bartholomew prayed for world peace Saturday in the Patriarchal Cathedral in Istanbul.

The service took place after the pontiff celebrated a special Mass at the Catholic Cathedral of the Holy Spirit in the city’s Beyoglu district.

Amid increased security -- an estimated 7,000 police officers were on duty in the city during pope's stay.

Pope Francis is the fourth pontiff to visit Turkey. Pope Paul VI visited the country in 1967, followed by Pope John Paul II in 1979 and Pope Benedict XVI in 2006.

The visit has sparked interest on social media with the #PopeInTurkey hashtag on Twitter trending strongly.

In the Turkish capital, Ankara, the first stop of his visit, the pope visited the Anitkabir mausoleum, the gravesite of Turkey’s founding father, Mustafa Kemal Ataturk.