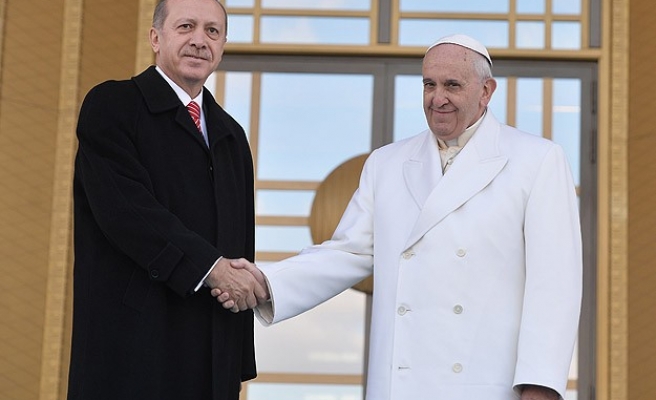 Pope Francis has arrived at the newly built Turkish Presidential Palace to have a meeting with President Recep Tayyip Erdogan.

The Supreme Pontiff was welcomed at the Presidential Palace, also known as the White Palace, by mounted troops.

As ten Turkish soldiers stood in ranks, the Supreme Pontiff walked down the ramp from his plane to be greeted by Turkey's Foreign Minister Mevlut Cavusoglu, Turkish Ambassador to the Vatican Prof. Mehmet Pacaci, Vatican Ambassador to Turkey Antonio Lucibello, and the famous Turkish actress Serra Yilmaz.

Over their heads both the Turkish and the Vatican flags waved, and the Pope, wearing a long white coat, shook hands with all of those who came to greet him.

Before leaving the airport, Pope had a cup of Turkish tea with minister Cavusoglu and the ambassadors.

Finally Pope Francis drove away in a Volkswagen Passat, while the rest of the party used a waiting Mercedes.

The 76-year-old Argentine pope is the fourth Supreme Pontiff to visit Turkey. Pope Paul VI visited the country in 1967, Pope John Paul II in 1979 and Pope Benedict XVI in 2006.

Arriving at Anıtkabir around 1:30 p.m. local time, the Pope first left a star-and-crescent wreath of red and white carnations on Ataturk's tomb with "Pope Francis" written on it. Then he took a moment, clasped his hands and prayed for Ataturk's soul.

After a photo and video moment just outside the mausoleum, the Pope headed to a special room to write in Ataturk's Memorial Book.

Pope Francis expressed his best wishes to Turkey with his message in Italian in the special memorial. He described the country as a "natural bridge" and "a cross roads where men and women of good will of all cultures, ethnicities and religions come together."

Later he visited the museum inside Anitkabir and spoke with officials about it.

The Pope was accompanied by Turkish Foreign Minister Mevlut Cavusoglu during his visit to Anitkabir.

Prominent Turkish actress Serra Yilmaz was also present at the visit, as she sometimes acts as a special cultural representative for official visits.

Pope Francis – the world’s first Latin American pontiff and spiritual leader of the globe’s estimated one billion Catholics – arrives in Istanbul tomorrow at a time of debate within his church and increasing anxiety for Christians caught up in Middle East conflicts.

On his agenda is mending ties with the Orthodox Christian world as well as promoting harmony with Muslims.

However, the pope arrives in Turkey after recently seeing his liberal views on homosexuals rebuffed by his own church, and Christian minorities in the Middle East facing persecution.

Francis will also visit the Hagia Sofia, a Byzantine church built in the sixth century and converted into a mosque when Ottomans conquered Istanbul – then known as Constantinople. The site has been a museum since 1935.

Along with the Hagia Sofia, the Pope will also visit one of the symbols of Istanbul, the 17th century-Sultanahmet Mosque, or the 'Blue Mosque', following in the footsteps of his predecessor Benedict XVI who visited the site in 2006.

The Argentinian pontiff will also meet Patriarch Bartholomew I, spiritual leader of many of the world’s Orthodox Christians. Bartholomew became the first Orthodox patriarch to attend Pope Francis’ inaugural mass last year, since the split between the churches.

The Catholic and Orthodox branches of Christianity split more than 1,000 years ago.

In Istanbul, the two Christian leaders are expected to sign a joint declaration on reuniting the churches.

Interreligious dialogue will be at center of Francis’ visit to Turkey, according to Pietro Parolin, secretary of state for the Vatican.

Parolin said that the Pope’s visit to Turkey was an attempt to strengthen relations between Orthodox and Catholic churches as well as express their concerns over difficulties that Christians face in the region.

The Pope is expected to discuss the persecution of Christian minorities in Iraq and Syria by militants of the ISIL.

Turkey is housing more than 1.5 million refugees taken in since civil war started in Syria and violence spilled over into Iraq.

When the Pope visited Albania in September, he criticized the group by saying ISIL militants cannot claim to be “the armor of God” when they use violence.

Before his visit to Albania and Turkey, Pope Francis was warned of the risk of an assassination attempt by ISIL. Vatican officials said: “There are no specific threats or risks that would change the Pope’s behavior or the way the trip is organized.”

There will be high security measures in Ankara and Istanbul where the Pope lands on Friday.

Pope Francis is in many ways different from preceding pontiffs. He is active on social media; his Twitter account @Pontifex boasts almost five million followers. His tweets appear in nine languages including Latin, German and Arabic.

When Turkey was shaken by a coalmine disaster that claimed more than 300 lives, the pontiff tweeted: “Let us pray for the miners who died in Turkey…”

The Pope’s first stop will be Turkey’s new presidential palace in Ankara, making him the first dignitary to visit the high-profile building.

Francis will leave Istanbul after signing a joint declaration with Orthodox patriarch.