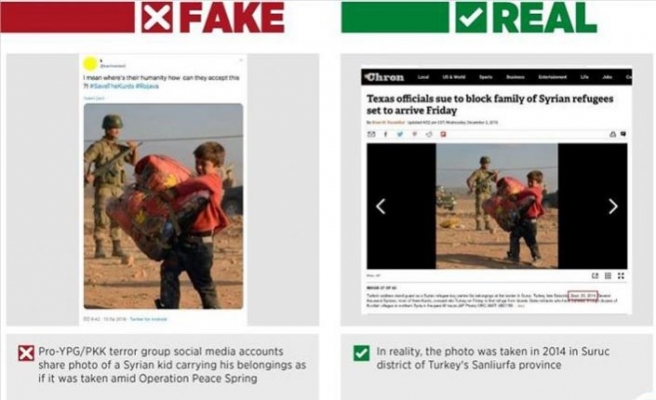 YPG/PKK-affiliated social media accounts use outdated photos to smear Turkey’s peace operation which seeks to eradicate a terror corridor in its southern border and bring stability to the region.

In one of these photos, a Turkish soldier is seen behind a Syrian child appearing to be forcing him to leave. However, further examination revealed that the photo had been taken in September 2014 in Turkey’s southeastern Sanliurfa province.

Another terror-linked social media account tried to manipulate public opinion with an image of a smiling baby being carried, claiming it was taken during Operation Peace Spring. The photo was found to have been taken in 2014, again in Sanliurfa. A photo of a Syrian child taking refuge in Greece was also used as if it was taken in northern Syria during Turkey's operation.

In another example, a manipulator social media account used the photo of a Syrian girl holding her toy to spread misinformation regarding the peace operation. In fact, the photo was taken in August 2014. Manipulator accounts posted an image of a Syrian mother and her child taking refuge in a tent camp as if they had to abandon their home on the eve of Turkey’s operation. The photo was found to have been taken in March 2016.

Pro-YPG/PKK social media accounts also used a photo of a crying Syrian girl and her mother as if because of Operation Peace Spring, but this has nothing to do with reality as the photo was taken in August 2015.

Ankara wants to clear northern Syria east of the Euphrates River of the terrorist PKK and its Syrian offshoot, the PYD/YPG.

In its more than 30-year terror campaign against Turkey, the PKK -- listed as a terrorist organization by Turkey, the U.S., and the European Union -- has been responsible for deaths of 40,000 people, including women, children and infants. 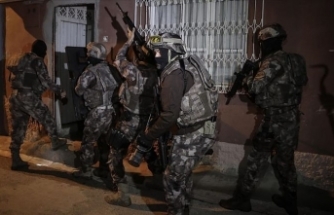