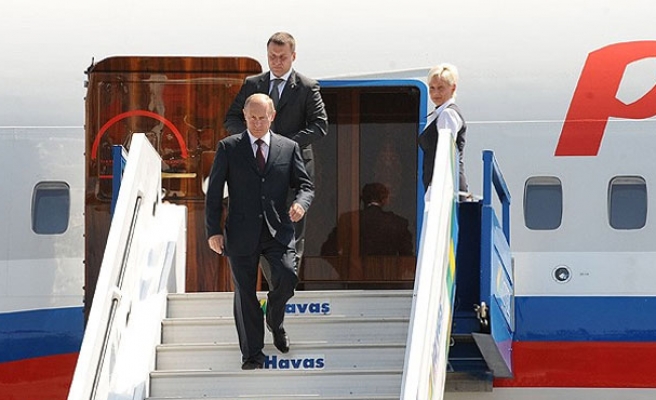 Russia's President Vladimir Putin has arrived in Ankara to start his one-day state visit to Turkey.

Tatarstan's President Rustam Minnikhanov and some other high-level bureaucrats are also in Ankara to participate in the fifth High-Level Russian-Turkish Cooperation Council Summit.

The Republic of Tatarstan is a federal subject of the Russian Federation located in the western Volga Federal District.

The plane carrying Putin landed in Ankara's Esenboga airport at around 13.10 local time, where extensive security measures had been taken.

Also, some Mercedes-brand armored cars brought especially from Russia could also be seen at the airport.

He began his visit by first paying his respects at the Anitkabir mausoleum, the gravesite of Turkey's founding father, Mustafa Kemal Ataturk.

He will head to the newly-built Presidential Palace of Turkey to meet President Recep Tayyip Erdogan, where the two state heads will hold a bilateral meeting.

Putin and Erdogan will also co-chair the fifth High-Level Cooperation Council meeting between Turkey and Russia.

The fourth meeting of the Turkish-Russian High Level Cooperation Council was held in St. Petersburg on Nov. 22, 2013 during which both countries signed five agreements to cooperate in the fields of energy, customs and information.

In an interview with The Anadolu Agency on Nov. 28, Putin termed Turkey an important foreign trade partner for Russia.

He noted that in 2013, bilateral trade turnover reached $32.7 billion. The accumulated Russian direct investments in Turkey exceeded $1.7 billion, and similar Turkish investments in Russia were now close to $1 billion. He agreed with Erdogan that within some years “we can bring our mutual trade up to $100 billion.”

The Russian president said that one of the promising areas was cooperation in space exploration.

Putin also said in the interview that 100 Turkish construction companies were now working in Russia.

Putin and Erdogan are also expected to exchange views on key international and regional problems.

The two countries differ hugely on Syria, where Russia is seen as the strongest ally of Syria's President Bashar al-Assad.

Turkey, on the other hand, has repeatedly said removal of the ISIL from Syria would be effective only if the al-Assad regime is also removed.