Reconciliation not needed as Biden prepares to meet Erdogan

US vice president's upcoming visit to Turkey will focus on ISIL 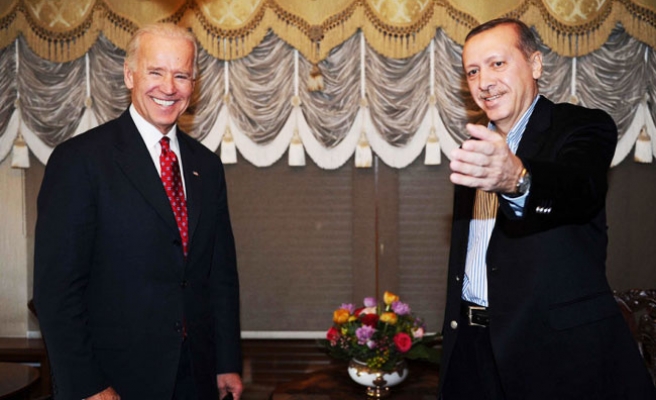 Reconciliation is not needed between Vice President Joe Biden and Turkish President Recep Tayyip Erdogan as relations are "in a good place," senior administration officials said just days before the leaders are to meet.

Biden will meet Nov. 21 with Turkish Prime Minister Ahmet Davutoglu in Istanbul. He will then participate in an extended meeting with Erdogan the next day, following a diplomatic gaffe earlier this year.

During an Oct. 2 speech at Harvard University, Biden said that Turkey and other U.S. allies in the region supplied or facilitated the development of ISIL and other extremist groups fighting the Syrian government.

But two days later during a telephone conversation with Erdogan, Biden “apologized for any implication that Turkey or other Allies and partners in the region had intentionally supplied or facilitated the growth of ISIL or other violent extremists in Syria,” according to an Oct. 4 readout provided by the vice president's office.

In an interview with CNN a month later, Biden denied that he apologized to Erdogan. "I never apologized to [Turkish President Erdogan]," Biden said. "I know him well. I've dealt with him. I called him and said, 'Look, what was reported was not accurate to what I said. Here's what I said.'"

Asked if the trip would serve as an opportunity for the two leaders to mend ties, the senior officials who spoke to reporters Tuesday said, “There’s no need for reconciliation.”

The officials spoke to reporters on the condition that their names not be made public.

“The relationship between the vice president and Erdogan is in a good place. They have a very close, good, professional relationship,” they added.

The bulk of Biden’s talks with Turkish officials are set to focus on U.S.-led efforts to combat ISIL in Iraq and Syria.

“When it comes to combatting ISIL, and stabilizing the situation in Iraq, and standing up the moderate opposition in Syria, these are all areas in which we and the Turks have a considerable overlap in our strategic view,” the officials said.

The U.S. has been engaged in leading an international coalition of more than 50 member states to beat back ISIL since August. The coalition has carried out numerous airstrikes against the militants, and destroyed key infrastructure while training partner forces in Iraq, and is planning to do the same for vetted Syrian forces.

While Turkey has offered to host training facilities for Syrian rebels, it has refused to become militarily engaged in the coalition unless buffer zones and a no fly zone are established in northern Syria.

“We continue to have conversations with Turkey about how best to bolster security in the region, including along the Turkey-Syria border to take the fight to ISIL, but at the moment we’re not considering a no-fly zone or a buffer zone,” the officials said. “I don’t think that anybody has taken anything off the table as it relates to the Turks.”

Biden’s visit to Turkey is part of a three-country tour from Nov. 19 - 23 that also includes Morocco and Ukraine.

He will meet Nov. 23 with Ecumenical Patriarch Bartholomew.