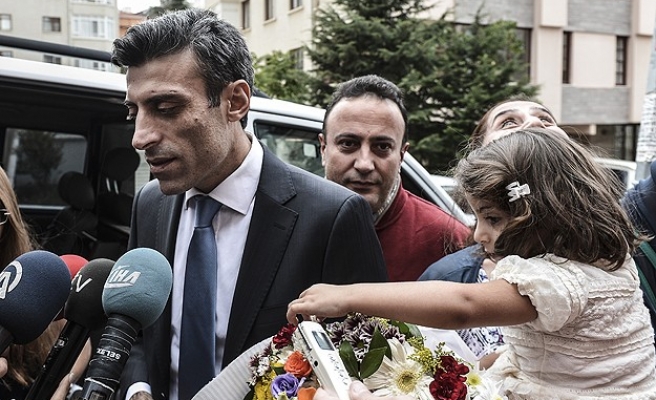 Rescued Turkish Consul General of Mosul, Ozturk Yilmaz, said the hostages managed to hide a cell phone from ISIL to coordinate with Ankara since day one of their captivity.

Yilmaz said their captors made hostages watch the beheading videos of American and British citizens.

"We overcame the fear of death since day one; beheading of journalists by ISIL never scared us," said Yilmaz, denouncing the beheading of James Foley, Steven Sotloff and David Haines as "cruelty."

"They made us watch the beheadings. There is no reason to kill like this, not for any religion or political thought," he said.

Yilmaz said there was a scuffle in his office during the raid day, June 11, when militants seized the consulate staff.

"A friend of ours helped with his sloppy Arabic speaking and explained the situation. We did not let any kind of video recording to put our country in a hard position," he said.

"ISIL's main strategy is that they don't want to keep the hostages at the same place for a long time," Yilmaz said. "Because Turkey is a strong country and have a strong intelligence agency, we were relocated eight or nine times."

He underscored that the rescue operation was a success that belongs solely to Turkey.

"We lost weight, did not eat time to time and could not make the militants provide basic needs to babies," said Yilmaz, adding that he lost 14 kilos during the captivity.

Turkey's consul-general to Mosul refused to read a message for his captors “despite having a gun put to his head,” another hostage revealed.

Speaking to the media at Ankara’s Esenboga airport following his and the other 45 captives rescue on Saturday, Alptekin Esirgun said: "We knew that we had to stay patiently there. There were times when we faced death but we supported each other."

Esirgun described how Consul-General Ozturk Yilmaz refused to read a message on behalf of Turkey that had been prepared by the fighters even though he was threatened with a gun.

Paying tribute to Yilmaz, he added: "We managed the process very well. I am thankful to him.”

Yilmaz also spoke to reporters and "All I want to do now is to go home with my family," said.

Asked if he gave in to despair during his captivity, Yilmaz replied: "A believer never thinks about despair. When you believe, the light of hope never dies."

The 49 hostages - diplomats, consular officials and their families - were kidnapped from the Mosul consulate on June 11, a day after ISIL took control of Iraq's second-largest city.