Russia scrapped the South Stream pipeline project to supply gas to southern Europe without crossing Ukraine, citing EU objections, and instead named Turkey as its preferred partner for an alternative pipeline 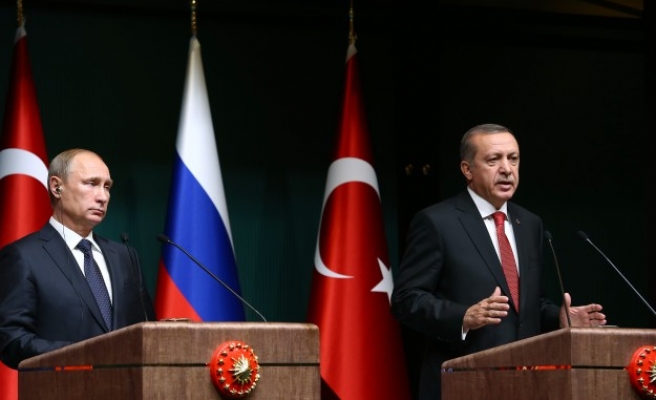 Turkey and Russia agree on working to avoid more chaos in Syria even as they widely differ on how to handle the ongoing crisis that has led to tens of thousands of deaths over the last four years.

Russian President Vladimir Putin said his country agrees with Turkey on not letting anymore chaotic environment in Syria. While Moscow has been the staunchest ally of the Syrian regime during the four-year civil war in the country, Turkey thinks the removal of the ISIL group from Syria would be effective only if the Bashar al-Assad’s regime is also removed.

"We mutually think that the situation in Syria is not normal," Putin said. "We don't want certain terrorist groups to gain strength," referring to ISIL, which controls large swathes of territory in Iraq and Syria.

Speaking on the Syria crisis, Erdogan left no room again that the Assad regime should be ousted and a consensus should be built against ISIL as well.

"I have clearly expressed that the recent regime in Syria terrorizes, kills and tortures. We differ on how to bring an end to the current situation there," Erdogan said.

Putin, meanwhile, said that Russia is making efforts to stop the "bloody war and conflicts" in Syria.

"Are we insisting on Assad to be in power? I would like to convey that question to the Syrian people. An election was held there and we saw that Assad has major support. However, we do not think that the situation in Syria is normal," Putin said, adding that Russia has limited contact with the Syrian government.

Erdogan, on the other hand, opposed Putin about the Syria's presidential election held in June. The voting resulted in victory for Assad, who received nearly 90 percent of the votes.

Erdogan said: "The ones who stage coups always prevail with major votes. We saw this kind of a situation in Turkey as well, when the pro-coup mindset won the elections with 80-90 percent of total votes. They conduct the elections with the "open voting and secret counting" method. That way, they could announce the results in any way they like. The exact same thing also happened in Egypt."

"President (Putin) has a different assessment to us," Erdogan told their joint news conference. "We agree a solution is needed, but we differ on the means."

The two leaders also discussed economic and energy issues during the press conference.

The Russian president said that Russia will increase the capacity of Blue Stream Natural Gas Pipeline by 3 bcm.

“We will meet Turkey’s growing energy demand by building a new energy terminal and increasing the capacity of Blue Stream.” he said.

He added that Moscow will halt the construction of South Stream Natural Gas Pipeline project and will build a natural gas hub on Greece border of Turkey. On Monday, Russia and Turkey signed a memorandum of understanding to build the hub.

Putin said that the European Union prevented the realization of the South Stream Project. “That means Russian gas will reach other world markets in the form of liquefied natural gas. The EU will not benefit from Russian gas any more. That is their choice.” he said.

Putin also said that whoever needs Russian gas will buy it through Turkey. The discount on Russian gas to Turkey will increase as the cooperation between two countries develops further, he said.

On economic ties, Erdogan said that the two countries aimed to raise the current $33 billion trade volume to $100 billion by 2023.

The Turkish president also touched upon the trade deficit between Russia and Turkey. "Some $25 billion of the current trade is composed of Russian exports to Turkey, while Turkish exports to Russia are some $7 billion. To reduce this gap, we have decided to increase our relations in many fields including energy, tourism, construction and investment," Erdogan said.

"We found [Russia’s] approach positive on the situation of Crimean Tatars. They say they are ready to provide Crimean Tatars with the rights which they have not been able to obtain thus far," Erdogan said in a joint press conference with Russian counterpart Vladimir Putin.

Russia took over Crimea in March after a controversial referendum, which drew the ire of international observers because Russian soldiers occupied the region during the voting.

Leaders of Crimean Tatars, a Turkic ethnic group, had also opposed the peninsula's referendum to declare independence from Ukraine and join the Russian Federation.

More than 4,000 people have been killed and more than 9,000 wounded in the conflict between the Ukrainian government and pro-Russian separatists in eastern Ukraine since mid-April, according to the U.N.

Turkey is among the countries against Russia’s annexation of Crimea and defends the territorial integrity of Ukraine, but did not join the Western-led economic sanctions on Russia.

Davutoglu hailed Turkey-Russia relations as historic and said they would set an example for the future.

Putin spoke of possible differences in attitudes of the two countries towards global issues, and said: "But the mutual benefit is so deep that it leaves us no choice but to further develop our cooperation."