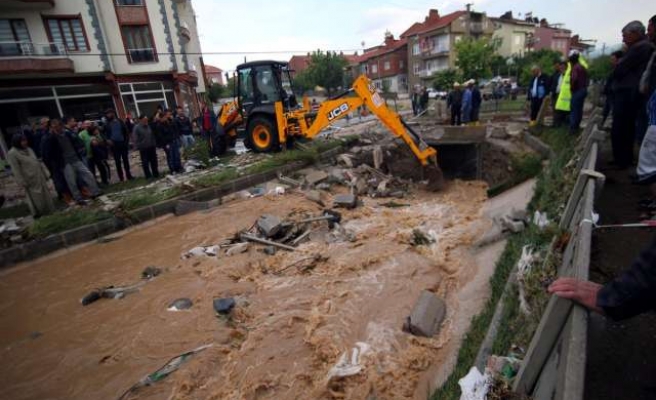 One person died and another is missing after heavy downpour over the week in Turkey’s Aegean, Black Sea and Mediterranean regions.

On Friday, a nine-year-old boy was swept away by floodwaters after torrential rain in Cankiri province near capital Ankara.

Efforts continue on Sunday to find the missing 22-year-old man in northwestern Turkey, one of the regions severely hit by the recent heavy rainfall across the country.

Poultry worker Taner Yaman has been missing since Friday afternoon in Geyve district of Sakarya province located on the Black Sea coast.

A rescue team supported by divers from nearby Yalova province and military helicopters flying overhead were dispatched to find the missing man.

Geyve District Mayor Murat Kaya said the efforts of the 70-member team was yet to find Yaman's whereabouts.

Scores of people trapped in their houses were rescued by fire brigades, civil defense forces and a provincial team from the Prime Ministry Disaster and Emergency Management Presidency.

Turkey's central, northern, western and southern regions have been gripped by heavy rainfall that started earlier this week.

At least 96 kilograms of rain fell per square meter in Geyve alone where as many as 700 houses and several shops suffered damage from the flood.

In northwestern province of Bolu, Yenicaga Lake overflew and flooded onto agricultural areas and pastures nearby on Sunday after it reached full capacity of water from the two-week rainfall across the province.

The heavy rain in many areas of Turkey since the beginning of June failed to fill up the dams which suffered from winter drought.

Turkey’s meteorological agency forecasts more rain for the next week.