Syrian opposition say they have the names of nearly 50,000 detainees whose release they are seeking. Trying to highlight the issue on the opening day of the talks, two opposition delegates carried pictures of veteran dissident Abdelaziz al-Khayyer, who disappeared in Damascus two years ago. 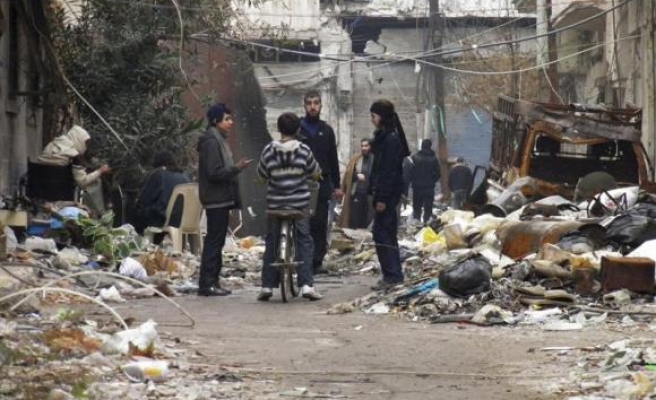 It was three in the afternoon when Lulu's phone stopped working somewhere in east Damascus near the Air Force Intelligence building, one of Syria's most feared security agencies.

That was last November. The 30-year-old had been shopping in Hamra, a 15-minute drive away. She has yet to come home.

Lulu's disappearance was one of many believed to have occurred in the weeks leading up to the peace talks in Geneva between President Bashar al-Assad's government and members of Syria's political opposition in exile.

The opposition say they have the names of nearly 50,000 detainees whose release they are seeking. Trying to highlight the issue on the opening day of the talks, two opposition delegates carried pictures of veteran dissident Abdelaziz al-Khayyer, who disappeared in Damascus two years ago.

The government said the list it was presented with had far fewer names that the opposition maintained and that most of them had either been released already or were never detained.

But in Damascus, arbitrary detentions continue to devastate families who have no way of finding their loved ones.

Those who survive detention face further hardship upon release. Often they are "advised" by authorities to leave the country. Many of those who can't end up afraid, and vulnerable to extortion by corrupt officials.

Ayman, who is in his mid-fifties, was detained briefly in 2011 - the year that protests first broke out against Assad - on suspicion of organising protests, a charge he denies.

During his two-week detention at another of Syria's main intelligence agencies, known as Palestine Branch, he said he underwent beating, humiliation and psychological abuse.

Ayman's account echoed many cases cited in a report issued by the U.S.-based Human Right Watch three months ago, which accused Syrian authorities of holding tens of thousands of political detainees and said arbitrary detention and torture had become "business as usual for Syrian security forces".

On the eve of the Geneva talks last week Syria denied a report which purported to show the systematic torture and killing of about 11,000 detainees, calling it an attempt to undermine the negotiation.

Ayman was released without further charges and advised to promptly leave the country, something he says he could not do because of his business and family ties.

"I keep hearing from them. Just the other day they called and said I should 'come over for a visit and a cup of coffee', but I didn't," he said from his home in central Damascus. He was referring to a common way in which the authorities invite people to interrogation and sometimes detention.

He says every few months he gets a visit from an intelligence official and ends up bribing him, to buy more time. "I think I've spent some $3,000 on bribes since my release," he said.

Though the time he spent in detention is relatively short compared to most former detainees, the experience has left him too afraid to approach government buildings, including the municipality or even the state-run phone company.

"Not even to order an Internet line," he said. "My wife goes instead of me. Psychologically, I just can't." He echoes the fears of many former detainees who avoid any form of contact with the government, for fear of being detained again.

Other former detainees end up heeding the warning to leave.

"I wasn't going to live paralysed by paranoia, not to mention the fear for my safety that my family felt all the time," said Mohammad, 28.

He was recently released after 20 months in detention in Damascus and, like other former detainees, asked to be identified only by his first name. During his captivity, Mohammad's older brother was also detained and died in custody.

"They told me that as long as I'm in Syria, they could not guarantee I wouldn't be detained again by some other intelligence branch, just like my brother was," said Mohammad during a recent meeting with Reuters in neighbouring Lebanon.

He was referring to his former captors at Syria's Air Force Intelligence. "They told me they'd already sent my name to the Syrian border as 'free to travel', and that I should leave as soon as possible for my own good."

Like thousands of former detainees in exile, Mohammad has no idea when he might be able to return. For now, he plans to etch out a living in Lebanon or Turkey, and seek an opportunity for political asylum somewhere in Europe.

Relatives of the disappeared are too frightened to discuss their ordeal, and usually powerless to help them.

Lulu's relatives are no different. Worried that they might attract the wrath of authorities, they never discuss the calamity over the phone or in front of strangers. They agreed to speak to Reuters on condition that their family name is withheld, and that only their daughter's nickname is used.

They also declined to say exactly why she may have been held, other than the fact that she had been involved in charitable work, an occupation which often draws the accusation from authorities of supporting Assad's opponents.

The family - like many others in their position - have been approached by the growing number of shady intermediaries who offer help in return for exorbitant sums of money.

"They tell you they can deliver clothes and extra food to her, and that they can bribe the interrogator on your behalf to go easy on her. They sell you the moon," said Lulu's brother. "We'll pay whatever it takes to get her out, but we don't know who to trust. We don't know where to go."

A family member who works in senior management at Syria's cell phone company managed to trace her cell phone signal all the way from Hamra to Air Force Intelligence, where it finally went out, offering a clue as to where she might have ended up.

Lulu's family also went to Hamra with Lulu's picture to ask traders if they saw her on the day she vanished. Several eye witnesses said they saw her approached by three state security men who forced her into a white, unmarked van.

After further investigation, the family now believe that Lulu is alive and detained in one of the intelligence branches, which they declined to name for fear she might be singled out. But they still do not know the charges brought against their daughter, or how to help secure her release.

Damascus-based human rights attorney Anwar al Bunni said no lawyer can help Lulu unless her case surfaces in court, a due process that many detainees are denied.

He added that conditions in detention centres have deteriorated so much due to overcrowding that some 50 detainees die each day from asphyxiation or from lack of sleep or water as they spend days in filthy, standing-room only cells - an image that evokes Lulu's family's worst nightmare.

"We're so worried about her. She's dainty and delicate and weighs barely 45 kg (100 lbs). How much can she withstand in some horrible state detention centre?" said her mother.