Hundreds of thousands more refugees are expected to arrive Turkey over the coming days, as Syrian Kurds are fleeing ISIL in the northern Syrian city of Kobani, U.N. refugee agency warns 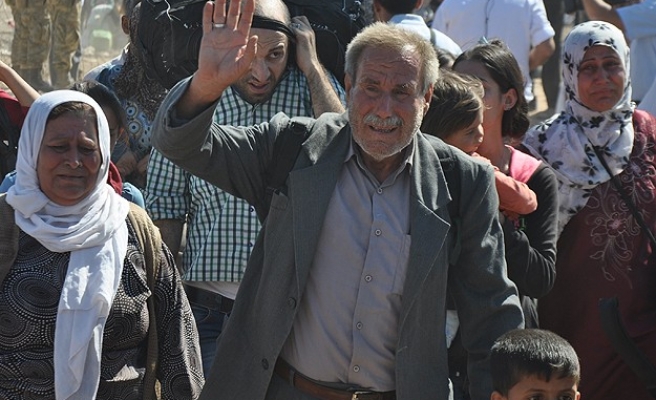 Turkey is facing one of the biggest influxes of refugees from neighbouring Syria since the war there began more than three years ago, the United Nations' refugee agency said on Sunday, as civilians continued to flee clashes between ISIL militants and Kurdish forces.

At least 70,000 people are confirmed to have crossed into Turkey in less than two days, and the real figure may be more than 100,000, Carol Batchelor, UNHCR's representative in Turkey told Reuters on Sunday.

"I don't think in the last three and a half years we have seen 100,000 cross in two days. So this is a bit of a measure of how this situation is unfolding, and the very deep fear people have about the circumstances inside Syria and for that matter, Iraq," Batchelor said in an interview from the Turkish capital, Ankara.

Turkey is already hosting 1.3 million Syrian refugees and officials estimate the relief effort has cost the government in excess of $3 billion.

Batchelor expressed gratitude to Turkey, warning that the ferocity of the fighting and the fast-moving situation near Kobani made any cross-border aid efforts impossible, meaning there was no option other than to keep the Turkish border open.

"Quite frankly we don't know when those numbers will end, we don't know what the future holds ... It could well go again into the hundreds of thousands. We need assistance for core, life saving support," Batchelor added.

"Turkish government authorities and UNHCR are preparing for the possibility of hundreds of thousands more refugees arriving over the coming days, as the battle for the northern Syrian city of Kobani (or Ayn al-Arab) forces more people to flee,” UNCHR said in a statement late on Saturday.

“I commend Turkey’s welcoming response to offer refuge and aid to this population so suddenly and violently driven from their homes in fear for their lives,” Antonio Guterres, the UN High Commissioner for Refugees, said.

The refugees, including women and children, are crossing the border by first entering an area built by the Prime Ministry Disaster and Emergency Management Presidency in Sanliurfa's Suruc district. They undergo a medical examination in the coordination center within the area and are registered.

UNHCR also noted that Turkey has been accelerating the construction of two camps for new arrivals. Turkey currently hosts at least 847,266 Syrian refugees, according to U.N. figures.

Turkey opened the frontier Friday to cope with a rush of Kurdish civilians fearing an attack on the Syrian border town of Ayn al-Arab, known as Kobani in Kurdish.

"We faced hardships by the new wave of refugees, but even the first phase of the process has been well conducted. Thankfully, 60,000 people have been accepted into Turkish borders unharmed," Turkish deputy PM Numan Kurtulmus said on Saturday.

The minister stated that the Syrians were entering Turkey from eight separate points on the 30 kilometers border region.

Kurtulmus described it as an "instant migration wave" after the seizure of around 20 villages in Kobani area by ISIL militants.

He said that relevant Turkish authorities had taken the necessary measures and that they were ready for the worst scenario.

"There is no other country in the world that can accept nearly 60,000 refugees into their soil in one day," he said.

Lokman Isa, a 34-year-old farmer, said he had fled with his family and about 30 other families after heavily armed ISIL militants entered his village of Celebi. He said the Kurdish forces battling them had only light weapons.

"They (ISIL) have destroyed every place they have gone to. We saw what they did in Iraq -- in Sinjar -- and we fled in fear," he told Reuters in the Turkish town of Suruc, where Turkish authorities were setting up a camp.

Sitting in a field after just crossing the border, Abdullah Shiran, a 24-year-old engineer, recounted scenes of horror in his village of Shiran, about 10 km (six miles) from Kobani.

"IS came and attacked and we left with the women but the rest of the men stayed behind ... They killed many people in the villages, cutting their throats. We were terrified that they would cut our throats too," he said.

Turkish soldiers looked on as the refugees, many of them women carrying bundles on their heads, streamed across. Hundreds of people huddled in the dusty fields with their few belongings.

Kurdish forces have evacuated at least 100 villages on the Syrian side since the militants' onslaught started on Tuesday.

"ISIL sees Kobani like a lump in the body, they think it is in their way," said Rami Abdulrahman, who runs the Syrian Observatory for Human Rights, which monitors Syria's civil war.

ISIL has executed at least 11 Kurdish civilians, including boys, in the villages it has seized near Kobani, the Observatory said.

Abdulrahman said more than 300 Kurdish fighters had crossed into Syria from Turkey late on Friday to help push back ISIL, but that it was not clear which group they belonged to.

"ISIL is killing any civilian it finds in a village," Mustefa Ebdi, director of a local radio station called Arta FM, told Reuters by telephone from the northern outskirts of Kobani. He said he could see thousands of people waiting to cross the border into Turkey.

"People prefer to flee rather than remain and die," he said. "(ISIL wants) to eliminate anything that is Kurdish. This is creating a state of terror."

On his Facebook page, Ebdi said the killing of 34 civilians - women, elderly, children and the disabled - had been documented. He said the residents of 200 villages had been forced to flee.

Scrambling to coordinate aid, the mayor of Suruc, Orhan Sansal, described the situation in the area as "chaotic".

"Help is coming but there are problems with accommodation. Some people are staying with relatives, some in wedding halls, some in mosques and municipal buildings," he said.

Esmat al-Sheikh, commander of the Kurdish forces defending Kobani, told Reuters by telephone that clashes were occurring to the north and east on Saturday.

He said ISIL fighters using rockets, artillery, tanks and armoured vehicles had advanced towards Kobani overnight and were now only 15 km away.

At least 18 ISIL fighters were killed in clashes with Syrian Kurds overnight as the militant group took control of more villages around the town, according to the Observatory.