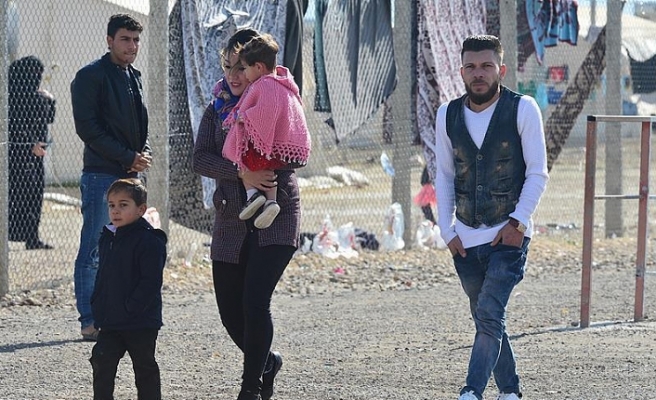 Syrians who have taken refuge in Turkey say they "feel human" in their host country and that they are hopeful about the future.

Tens of thousands of refugees, whose humanitarian needs have been taken care of by the Turkish government and NGOs for years at modern facilities, pray for the end of the war and a safe return to their homes in Syria.

Shuhaida Osman, one of the Syrians who have been taking shelter in a refugee camp in Turkey's southeastern Sanliurfa province, told Anadolu Agency that she was rescued last minute by Turkey, and that the shock and trauma of the civil war were still not over.

She said: "Syrian women are very happy to be in Turkey, where there is life. Despite being in a camp environment, we have very good conditions and a very good life here."

"Many Syrians have gone to Lebanon and Jordan where they don't have these conveniences and suffer greatly.

"Syrians feel human in Turkey. At a time other countries have shut their doors to us, Turkey provides education to our kids, vocational courses to women and supports all Syrians," Osman said, adding: "May Allah be pleased with all Turks, be it seven year old or seventy."

Gayidah Najat, another refugee who lost her husband and two children in a bomb attack on their home by terrorist YPG/PKK in northern Syrian city of Ayn al-Arab, also expressed her gratitude, stressing that it was her only option was to take refuge in Turkey with her remaining seven kids.

In its more than 30-year terror campaign against Turkey, the PKK -- listed as a terrorist organization by Turkey, the U.S. and the EU -- has been responsible for the death of some 40,000 people, including many women and children.The PYD/YPG is its Syrian branch.

"We couldn't have survived in the middle of the war, had to leave. We always heard all the good things from other Syrians who went to Turkey before us," said Najat.

"[President] Recep Tayyip Erdogan is the protector of all oppressed, he takes good care of us," she added. "We hope we will return to our countries one day, with wonderful memories."

She also said her children have been going to school thanks to Turkey, one of them was about to graduate.

Zaliha Badr, who came as a refugee five years ago after a long and painful journey from northeastern Syrian city of Ras al-Ayn, said she saw Turkey for the first time and got used to everything very fast.

"We fled the war and came here without expecting any of this good treatment. Thank God, we are very happy here," she said.

"There is peace and security in the Turkish-controlled cities of Syria near the border. We look forward to the end of the war that has been ravaging our country for years. We will go back," Badr added.

Turkey hosts over 3.5 million Syrian refugees, more than any other country in the world.