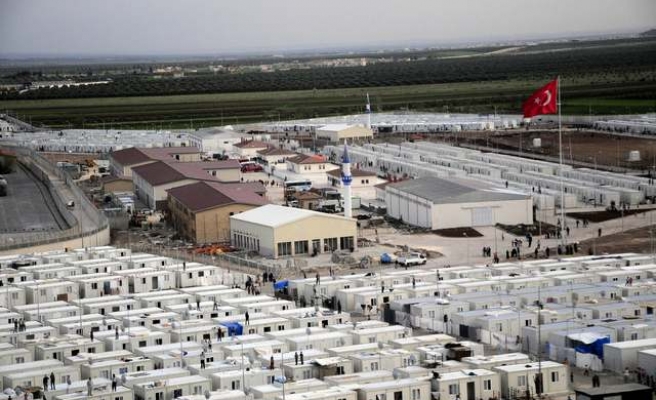 Turkey is turning away Syrian families without passports after a refugee influx caused by intensified "barrel bombing" in Aleppo filled up its refugee camps, the Turkish Humanitarian Relief Foundation (IHH) said on Wednesday.

One of the Syrian opposition's most vocal allies, Turkey has taken in hundreds of thousands of Syrian refugees.

But resources have been stretched at the Turkish border after President Bashar al-Assad's forces intensified attacks on Syria's second city of Aleppo, dropping barrel bombs and slowly winning ground against rebels weakened by weeks of infighting.

"Camps in Kilis are at full capacity unfortunately, but there are free spaces in our other camps," a press officer for Turkey's state AFAD disaster agency said, referring to refugee camps near the Turkish border.

Ankara is sticking to its "open border" policy and refugees will be accepted "following necessary security controls", the press officer said.

A camp inside Syria near the Syrian Bab al-Salam border crossing, about 50 km (30 miles) north of Aleppo, is also full, IHH's Kilis media officer said, adding that numbers there had risen to 25,000 from 14,000 in the last week.

"The Syrians who don't get into Turkey are sheltering in Syria - just under blankets," the media officer said. Night-time temperatures in the area fall below freezing.

Turkish police at Oncupinar border post across from Bab al-Salam said restrictions applied to those without passports, but that the crossing was open, with no big crowd at the gate.

The use of barrel bombs - oil drums or cylinders packed with explosives and metal fragments dropped from helicopters - was condemned by Syria's opposition delegation and its Western backers at last month's peace talks in Switzerland.

"This was hard to imagine before".

Further east, the Syrian Observatory for Human Rights said that for the last 18 days Turkish authorities have prevented more than 2,000 refugees, including women and children, from crossing into Turkey after fleeing the city of Raqqa.

"Most of them are living in the open, near to the barbed wire at the Tel Abyad border," the British-based watchdog said.