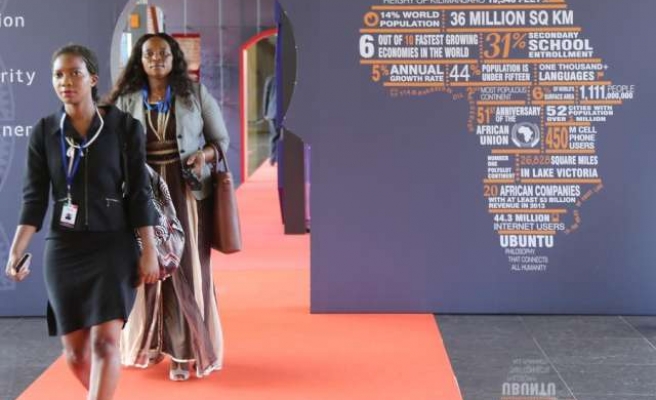 Turkey considers itself a strategic partner of Africa, working together for the advance of democracy, good governance and prosperity, Turkish Foreign Minister Mevlut Cavusoglu said.

Cavusoglu's remarks appeared in the article titled "Turkey-Africa: Solidarity and partnership," penned by the minister himself, and recently published in various media outlets in Africa, including in Somalia, Ethiopia, Uganda and Rwanda.

The article comes ahead of the second Turkey-Africa Cooperation Summit, which is scheduled to run from Nov. 19-21 in Malabo, the capital of Equatorial Guinea.

"Turkey has never been in a colonial position or relationship with the continent. On the contrary, African nations looked for help from Ottomans in their struggle against colonial oppressors," Cavusoglu said in the article. The Turkish War of Independence, fought close to a century ago, has had a strong influence on the African peoples in their struggle for liberation and independence, he wrote.

Cavusoglu said Turkey has never been indifferent to developments in Africa, and has always been in solidarity with the African people in their struggle for freedom from colonialism and national independence.

"Turkey has already made a change and working for more change not only in Somalia, but in Africa," he said, referring to the Turkish-Somali partnership initiated on August 19, 2011, when then-Prime Minister Recep Tayyip Erdogan landed in Mogadishu along "with his family and a large delegation composed of the different segments of Turkish State and society."

"This flight turned the course of events in Somalia which had been in turmoil for so long with chronic instability and prolonged social strife creating, in turn, serious humanitarian crisis, coinciding with severe drought and famine," Cavusoglu said. From that time onwards, he said, the Turkish and Somali people have been striving intensively to ease the effects of the dire situation and to rebuild the country.

The efforts bore fruit, resulting in the "revival of social, economic and political life in Somalia," Cavusoglu said, adding that work was in progress for a new and better future.

The minister said that since 2005, the year of Africa in Turkey in conjunction with Turkey’s Opening Policy towards Africa -- dating back to an Action Plan adopted in 1998 -- there has been increased engagement with African countries. Turkey has become an important partner for development, trade and investment in the continent, he said.

"Turkey’s opening policy towards Africa is now successfully completed," Cavusoglu said. Turkey has embarked upon a new policy in 2013 under the name "Turkey-Africa Partnership," which takes the motto of “African issues require African solutions” as its main principle, he said.

Turkey also stood ready to contribute through diplomacy to the peaceful settlement of conflicts, Cavusoglu said.

"Turkey will remain committed to fully supporting the African Union in achieving its goals on the priority areas which will further consolidate African ownership of African issues. That is why we feel that it is a privilege for Turkey to be a strategic partner of the rising Continent of Africa."

Two hundred business leaders and a delegation led by Erdogan, and including Cavusoglu, will attend the Turkey-Africa Cooperation Summit along with leaders from many countries in Africa.

A Joint Declaration and Action Plan for Turkish-African partnership from 2015 to 2018 is expected to be approved at the summit with the theme “A New Model for Partnership for Strengthening of Sustainable Development and Integration of Africa”.

The plan will include actions in industry, education, health, trade, energy, investment, peace and security.

The African Union declared Turkey a strategic partner in 2008, and a Turkey-Africa Cooperation Summit was held the same year in Istanbul.

Trade volume between Turkey and Sub-Saharan countries has increased more than tenfold over the past 13 years, reaching $7.5 billion in 2013, up from $742 million in 2000, according to data from the Turkish Ministry of Foreign Affairs.