Other countries should not interfere with Venezuela’s commercial and economic activities, says Venezuela's Nicolas Maduro 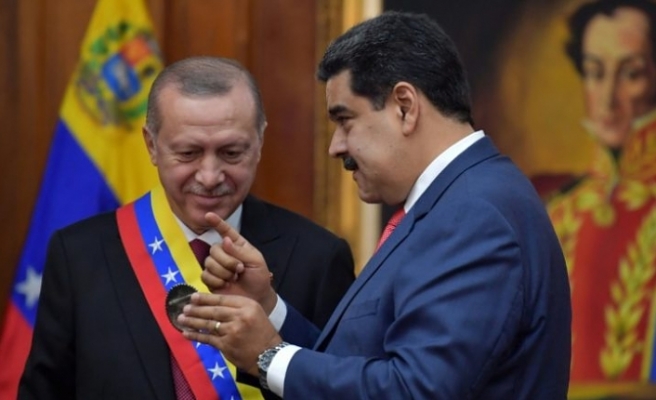 Venezuela’s president said on Monday that his nation and Turkey have a "magnificent" future to build together.

Speaking at a joint press conference with Turkish President Recep Tayyip Erdogan, Nicholas Maduro expressed hopes that Erdogan’s visit would pave the way for a "new phase" in relations between the two countries.

His remarks came after a meeting with his Turkish counterpart, in which Maduro said the two leaders signed agreements on economic issues as well as on defense, education, and culture.

Maduro underlined his confidence that Turkish investors would "act on the interests of both countries," praising the "beautiful" buildings erected in the South America country by Turkish firms.

"Turkish investors will continue to develop and strengthen trade and the progress in oil production and refineries, petrochemicals for gold production, in diamonds, coltan, iron aluminum and tourism," said the Venezuelan president.

Maduro stressed that the two countries enjoy "independent" economic relations with a high degree of transparency.

"We do not interfere in the trade of the U.S. or other countries, nobody should interfere with our commercial and economic activities," he said, stressing that the South American country would continue to legally export its gold resources.

In what Maduro said was a clear message to the world, he stressed Turkey’s position as an "important leader" in Eurasia and the current head of the Organization of Islamic Cooperation (OIC) as well as Caracas’ place as the leader of the Non-Aligned Movement.

He said the world was now past the time of "old empires of crushing supremacy" and had entered a multi-polar age.

"Turkey will play a critical role in the new multi-polar, multi-centered world,” Maduro said, adding that Caracas also has a "multi-polar agenda."