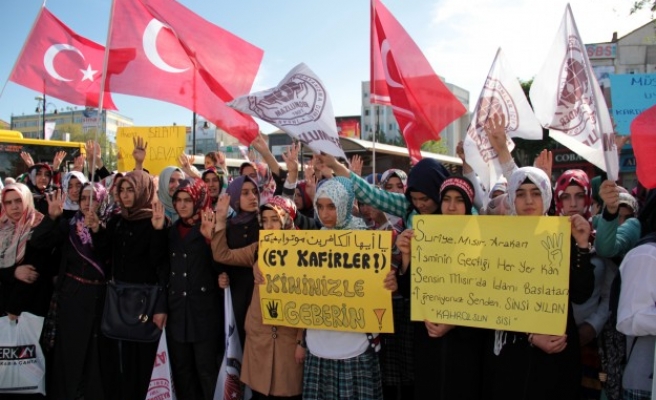 A second wave of death sentences of Muslim Brotherhood supporters passed by an Egyptian court on Monday- which brought the total to over a thousand people- could be more forcefully condemned by Turkey, say analysts who add that Turkey is also in a position to speak up for the "silent Muslim" population of Egypt.

Turkey’s Deputy Prime Minister Bulent Arinc called the court rulings shameful not only for the Egyptian government but also the world powers that have remained "silent" on the decision.

Protesters, bearing Syrian, Egyptian and Palestinian flags and Morsi's posters, on board boats near the Egyptian chief consulate in Istanbul unfurled banners that read, "Will the world keep quiet against this cruelty?" "Get out Sisi, we are with you Morsi" and "Junta's sentence to death cannot appall Islamic resistance."

"The [shocking] part is that Muslims find the Western attitude surprising," says Salman Sayyid, a British scholar and lecturer in Sociology at Leeds University, who adds that "systematic hypocrisy" of the Western-dominated world in issues of Muslim emancipation -- be it in Burma, Central African Republic or Egypt -- has been rigorously exposed.

Azzam Tamimi, a British Palestinian political activist and founder of London based Al-Hiwar Tv Channel, said: "Turkey has proven to be unique in its stance to support democracy in Egypt. Most other countries in the Muslim world are either supportive of the coup or keen not to anger those that support it."

The position of the "silent majority of the Ummah" (collective community of Islamic peoples) is very close to Turkey’s position but they need Turkey to be bolder in its stance not only in relation to Morsi but generally, adds Sayyid.

"What happened to Morsi is a metaphor for the condition of the Ummah and not just a singular episode," says Sayyid.

The challenge being faced by 'Islamists' is that their opponents are deeply linked and supported by the existing world order, adds Sayyid.

"The Ummah is engaged in a long struggle to free itself from the consequences of direct and indirect Western rule and the lesson it needs to learn is that democracy without decolonization will not deliver just, peaceful and prosperous societies.

"Parties like the Muslim Brotherhood have to become more expert in the political arts; they have to learn about the banality of government, rather assuming that technocrats with integrity will be enough," says Sayyid.

Tamimi says he believes that "Western indifference" to the mass violations of democratic values and human rights is the result of a combination of lobby and pressure exercised on Egypt's military-backed government officials by Saudi Arabia and the United Arab Emirates who he said funded the coup and continued to support it.

In July 2013, after Morsi was toppled by the military led by Abdel Fattah El-Sisi, Saudi Arabia unveiled a $5 billion aid package. The United Arab Emirates offered a grant of $1 billion and an interest-free loan of $2 billion.

Sayyid concurs: "The real problem comes from the Saudis and their attempt to forge a sectarian shield for their rule."

Amnesty International has warned of 'grave flaws' in Egypt's criminal justice system while the U.S. has urged Egypt's to reverse mass sentences after the second wave of mass penalties.

"The EU and the U.S officially support the coup although some of the policies and the actions taken by the coup regime are proving to be very embarrassing for them," said Tamimi.

Tamimi puts what he calls "the counter revolutionary period" in Egypt in a historical context, particularly in relation to Latin America. He refers particularly to Chile, which -- like the rest of South America -- had its bid for democracy "aborted by the CIA."

Tamimi says he expects the counter revolution in Egypt to eventually fail.

"Democracy will take fewer years to be reinstated than in the case of Chile because the Egyptian people never ceased to oppose the military dictatorship," he concludes.