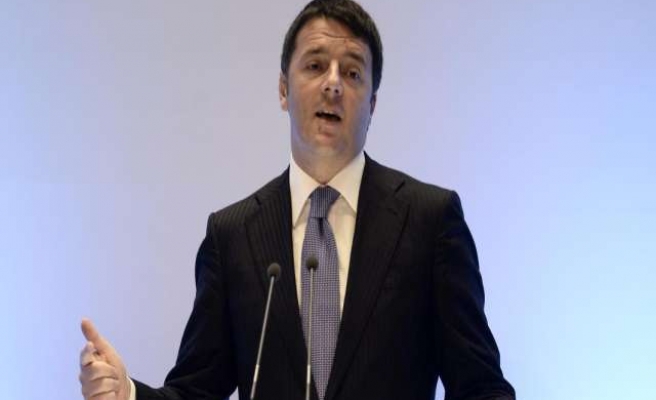 Davutoglu and his Italian counterpart, Matteo Renzi, were speaking on Friday at the Turkey-Italia Business Forum in Istanbul, hosted by the Foreign Economic Relations Board of Turkey.

Davutoglu said earlier that the two countries had cooperated on projects such as the ATAK series of helicopters – the first locally made Turkish attack helicopter – and the TURKSAT satellite.

Davutoglu said the trade volume between Italy and Turkey had reached some $20 billion in the last five years from $13 billion in 2009.

Matteo Renzi pointed at infrastructure projects in Turkey such as a third bridge over the Bosporus strait, calling on Italian investors to eye participation in this $20 billion scheme.

On Thursday, the U.S. Department of Defense announced that it chose Turkey and Italy to provide heavy maintenance, repairs and overhaul services to Lockheed Martin Corp's F-35 fighter jet in Europe from 2018.

A center, to be built in Turkey’s central Anatolian province of Eskisehir, will carry out maintenance and repairs for F-35 fighter jet engines.

Joint Strike Fighter is an international program aimed to design, develop, produce and provide logistic support for the F-35 combat aircraft. Turkey, the U.S., UK, Italy, Netherlands and Denmark are all members of the joint program.

F-35s are a family of advanced fighter jets with the capability of avoiding radar detection.