'We have 1,000 two-story container houses ready right now and 248 more such houses will be prepared within two weeks,' Kilis province deputy governor says 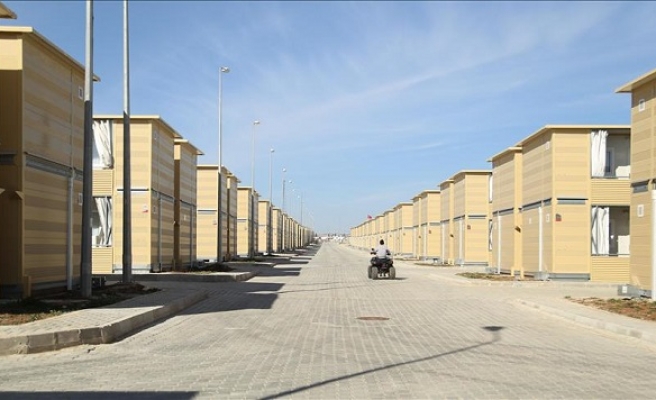 Turkey has prepared a first-of-its-kind two-story container homes for refugees at a camp in south-central Kilis province in anticipation of a fresh influx of people fleeing from a nearby Syrian town, a provincial deputy governor has said.

“The two-story container refugee camp is a first-of-its-kind in the world,” Buke said, adding that the container homes had been designed by Turkish engineers.

He hoped that the two-story container camp would help Syrian refugees settle in at their new homes easily and quickly.

“We have been hosting Syrians since 2012 and before establishing the second part of the camp we considered their daily life routines and their relations with each other after long observations,” he said.

He said the new houses would allow Syrians to live in an environment of peace and security with their neighbors and relatives.

“The two-story containers also have their own balcony,” Cimen said.

“The new accommodations have been developed using a sustainable and low-cost gravity-fed solar receiver and storage system. Electricity for the new part of the camp will be generated by solar energy,” he added.

Kilis Governor Suleyman Tapsiz, who has been serving in Kilis for more than four years, is said to be behind the idea of building the two-story container camp, which will also host a school, three social facilities and a market.

Qatar and Kuwait also provided funds for the project.

According to official data, more than 35,000 Syrian refugees have been provided shelter at refugee camps near the border in Kilis province.

Last week, several local and international media outlets claimed that there had been an accumulation of refugees at the Syria-Turkish border due to Ankara's alleged unwillingness to open crossing points.

However, Deputy Prime Minister Yalcin Akdogan dismissed all such claims during his visit to Kilis Friday.

"Turkey's open-border policy remains in place. We are opening our gates and embracing all those who flee death and fear of their lives," Akdogan said.