Turkish Prime Minister says political issues have a huge impact on world finance and economy that should also be discussed at G20 meetings. 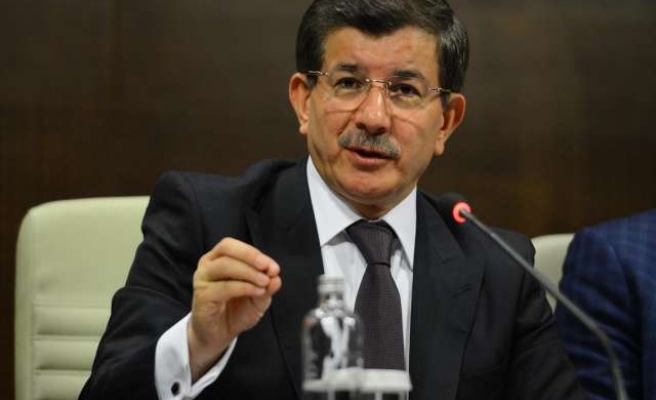 Prime Minister Ahmet Davutoglu said Friday the G20 should also serve as a platform to discuss global political issues as well as being a technical financial forum.

Davutoglu made the remarks at a press briefing in the Australian city of Brisbane, where the premier is attending the G20 summit.

The Turkish premier said some G20 members prefer the summit to be more of a technical and financial forum, while members such as Turkey wanted it to serve as a platform to deal with political problems as well, if need be.

He said that this was important because many global political issues were interrelated with economic and financial issues.

"Lack of confidence in the political environment makes it difficult to maintain stability in business world," he said.

The prime minister is expected to hold talks with G20 leaders in Brisbane on the sidelines of the ninth meeting of the 20 heads of government on November 15 and 16. Turkey is also scheduled to take over the 2015 term of the G20 presidency on December 1.

When there is political instability in the Middle East, oil prices and the entire world’s economy gets affected, Davutoglu said.

He also spoke about the recent crisis in Ukraine that he said made an impact on European energy markets.

In response to a question, Davutoglu welcomed media reports that U.S. President Barack Obama was asking his advisers to review their Syria strategy.

CNN reported that Obama had called for the review after realizing that the Islamic State of Iraq and the Levant, or the ISIL could not be defeated unless Syrian President Bashar al-Assad was toppled.

Turkish premier said it was the right approach to the Syrian issue.

He stressed on the fact that Turkey had been arguing for long that an integrated strategy was needed to solve the Syrian crisis rather than a "point and selective strategy" like the airstrikes being conducted by the U.S.-led coalition in the Syrian town of Kobani.

"The Syrian crisis is not only a military, terror or political problem, but a situation that morphed into a humanitarian tragedy where war crimes are committed," he said.

He called for a new political structure in Syria that would embrace all elements of the Syrian community and assure stability in the war-ravaged country.

The U.S.-led international coalition, including France, Germany, and Saudi Arabia, has been pounding ISIL targets in Iraq and Syria.

Ankara has been critic of the coalition's airstrikes for focusing on removing only the ISIL threat in Syria and not targeting Assad regime forces.

As Ankara is set to assume as the G-20 president for 2015, Davutoglu stressed that Turkey would primarily focus on development and energy issues.

He also said Turkey would reach out to non-member regions and continents throughout the world as one of its primary focus during its G20 presidency.

“The interaction between the G20 and developing and low-income countries needs to be strengthened if we wish to develop a truly global approach for growth,” the premier said in remarks published in a publication produced by the University of Toronto’s G20 Research Group.

Turkey will also be the first presidency to coordinate the G-20 Food Security and Nutrition Framework, which is part of the country’s commitment to free the world from hunger.

Davutoglu said "what we need today in international system, international governance is inclusivity in every aspect without inclusivity there will be no legitimacy. The problem of UN today is UN General Assembly is inclusive but UN Security Council is exclusivist in the sence of the special status of certain nations."

The premier stressed the G20 agenda should in turn represent a global agenda and not just that of 20 countries.

He also talked about Turkey's G20 presidency and said Turkey would be the voice of everyone during this term.

Turkey is set to take over the 2015 term-presidency of the G20 group on Dec. 1 following a meeting of the G20 heads of government in Brisbane on Nov. 15 and 16.

"When during our presidency we want to be the voice of everybody and to set up the agenda so that if possible we want to bring low-income countries and the G20 countries together to understand each other," he said.

The prime minister also said Turkey would work with everyone to integrate the low-income countries and the least-developed countries with the international economic system.

"Turkish presidency's main term will be inclusivity for all human beings" he said.

Davutoglu also said the G20 summit would be a turning point not just for the friendship between Turkey and Australia, but for the entire world economy itself.

Meanwhile, Davutoglu also met with Angel Gurria, Secretary-General of the Organization for Economic Co-operation and Development and Dilma Rousseff, President of Brazil at the summit.