Prime Minister Davutoglu says Turkey regards security of Kurdish region as vital as its own. 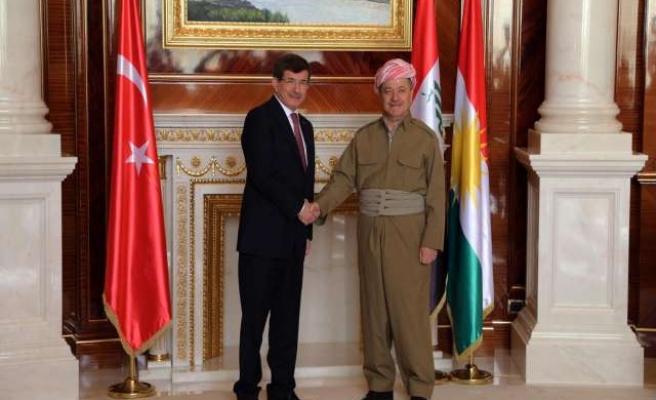 Turkish Prime Minister Ahmet Davutoglu reiterated Friday Turkey's support for ensuring the security and stability of the Iraqi Kurdish region, which has recently suffered from attacks by ISIL militants.

"It also matters for Turkey as a vital issue that is directly related to its own security," he said at a joint press conference with Kurdish Regional Government President Masoud Barzani.

The Turkish premier made his remarks after his meeting with Barzani in the region's capital, Erbil. The leaders discussed bilateral relations and humanitarian, security, political and economic issues.

Davutoglu said the two talked extensively about security in light of escalating ISIL attacks. He said Turkey's security support for the Kurdish region would increase.

Turkey's support includes the training of Iraqi Kurdish peshmerga forces that are assisting the country's fight against the ISIL.

Davutoglu described the recent decision to allow Iraqi Kurdish peshmerga troops through Turkey and into the Syrian town of Kobani as a reflection of the trust between Turkey and the Iraqi Kurdish region.

The Turkish prime minister said he and Barzani also discussed the new central government in Baghdad.

"We all prefer an inclusive political structure in Iraq, where every ethnic, sectarian and religious group is represented at a level it deserves. This structure will be the guarantee of Iraq's future," he said.

Barzani expressed hope that Davutoglu's visit would be the starting point in eliminating any previous problems in bilateral relations.

"As we all know, a new phase has opened today under new conditions. I hope that this visit will lay the ground for efforts to boost and further reinforce our bilateral relations and cooperation," he said.

There are more than 1,500 Turkish companies actively working in the Iraqi Kurdish region.

As for the energy dispute between Baghdad and Erbil, Davutoglu said Turkey will do its best to help and looks forward to seeing a final agreement.

Only last week, Baghdad and Erbil came to an agreement to allow the Kurdish region to sell the oil it drills.

Barzani said that, though it is not final, there is an agreement with the central government that Baghdad will make two payments of $500 million to Erbil in return for 150,000 barrels of Kirkuk's oil per day.

The oil will be sent to Baghdad via the Kurdish region's pipeline, which is under the control of the Iraqi National Oil Company.

"Afterwards, a delegation from the Kurdish Regional Government will go to Baghdad to launch the negotiations on basic problems and both sides will work to reach a final settlement," Barzani added.

Davutoglu began his two-day visit to Iraq on Thursday in Baghdad, where he met with central Iraqi government figures.