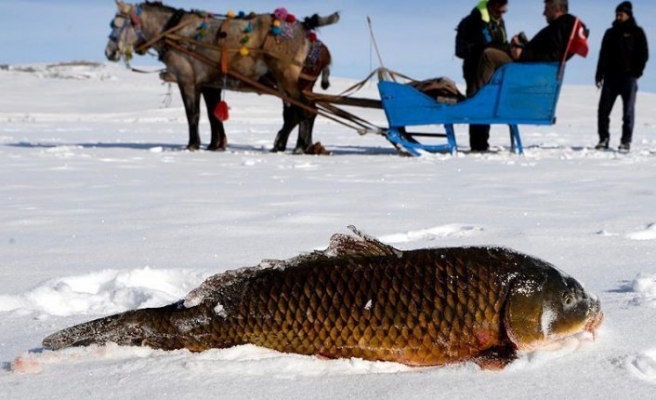 An Eskimo-style fisherman in northeastern Turkey has caught the biggest fish of the winter season -- a freshwater carp of 5.2 kilograms (nearly 11.5 pounds).

Located on the border of Ardahan and Kars provinces, Lake Cildir is the second largest lake of the eastern Anatolian region, with an area covering around 123 square kilometers (47.5 square miles).

The ice layer covering the lake has reached a depth of 60 centimeters (23.6 inches) due to the severe weather conditions. However, it has lured many ice fishers in the region every winter.

Speaking to Anadolu Agency, fisherman Yakup Topkaya said he captured the biggest fish of the season using the Eskimo method with the help of axes, shovels and fishnets.

He said the equipment was needed to break the thick layer of ice covering the surface lake.

"I have been doing this job for about 20 years. This is the first time that I caught such a big fish at the beginning of the season," Topkaya said, adding: "I hope this fish is a sign for the season to be fruitful."

Both professional fishers and amateurs are highly interested in fishing carp -- dubbed "yellow fish" by locals -- using the Eskimo method for fishing.