Turkey, EU agree on many proposals, but more time needed

EU leaders agree on several proposals by Turkey to solve migration crisis, but more time is needed to finalize plan 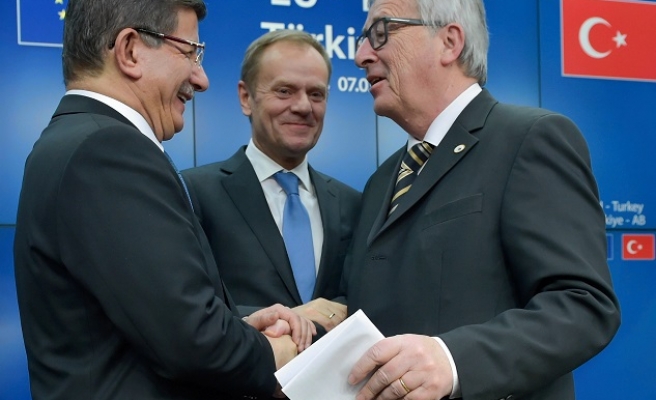 European Union leaders have agreed on a wide range of proposals by Turkey to solve the migration crisis, but say they need more time to finalize the plan.

EU leaders will continue discussing the plan at another summit meeting on 17-18 March.

European Council President Donald Tusk told reporters in Brussels following a Turkey-EU summit meeting Monday that the bloc has agreed on six proposals by Turkey, including the return of all irregular migrants, accelerating visa liberalization for Turkish citizens and burden sharing of Syrian refugees.

Ankara has requested visa-free travel for its citizens by the end of June and an additional 3 billion euros ($3.3 billion) to meet the needs of Syrian refugees in Turkey.

According to Turkey’s proposal to the EU, seen by Anadolu Agency, the country wants the 28-nation bloc to "share the burden'' based on a formula of "for every Syrian readmitted by Turkey from the Greek islands, another Syrian will be resettled from Turkey to the EU member states".

"Our main objective is humanitarian objective… we don’t want to see women and children dying in the Aegean Sea," Davutoglu said.

Turkey is hosting the largest number of Syrian refugees in the world and has spent more than 7 billion euros ($7.7 billion) on meeting the needs of the refugees, according to European Commission figures released last year.

According to the proposal, Turkey will "readmit expeditiously all irregular migrants crossing into the Greek islands from Turkey without prejudice to Turkey’s current commitments under international law”.

"This readmission will be for a temporary period and only for humanitarian purposes," the proposal says.

European Parliament President Martin Schulz told reporters at an EU-Turkey summit in Brussels on Monday that the parliament was prepared to discuss speeding up the procedure on visa-free travel for Turkish citizens.

"Visa liberalization is one of the requests of the Turkish side in the process of full and deepened cooperation," Schulz said. "We are prepared to discuss to speed up the procedure but in full respect of the parliamentarian rights of the European parliament."

The EU has already pledged 3 billion euros to meet the needs of Syrian refugees hosted in Turkey along with visa liberalization and the acceleration of the candidate country’s accession process.

In exchange, the EU expected Turkey to crack down on human smugglers and stem the flow of refugees coming into Europe via its neighbor Greece.

Schulz said Turkey’s request for an additional 3 billion euros required the cooperation of the European parliament and depended on whether EU member states were "willing to put money on the table".

Turkey has said Monday's summit in Brussels should not only focus on irregular migration but also on Turkey's accession into the EU. Schulz said there had been an attempt to link the two issues.

"One thing is [clear] for us as European parliamentarians […] we have to separate accession negotiations between Turkey and EU and all questions related to opening the new chapters from the short-term management of [the] refugee crisis," Schulz said.

“To avoid that refugees arrive in Greece, we have to cooperate with Turkey,” French President Francois Hollande told reporters in Brussels.

In exchange for the 3 billion euros that were allocated to Turkey by the EU, Ankara must "make commitments in relation to the fight against smugglers" and conduct readmissions of "a number of migrants who left Turkey" to Europe, explained Hollande .

"The plan is simple to tell, hard to implement: it's external border security, cooperation with Turkey and solidarity with Greece, and that is what France will defend," summarized the French leader.