'As long as our nation keeps strong our unity, togetherness and solidarity, [we can prevail over terrorism],' Turkish president says 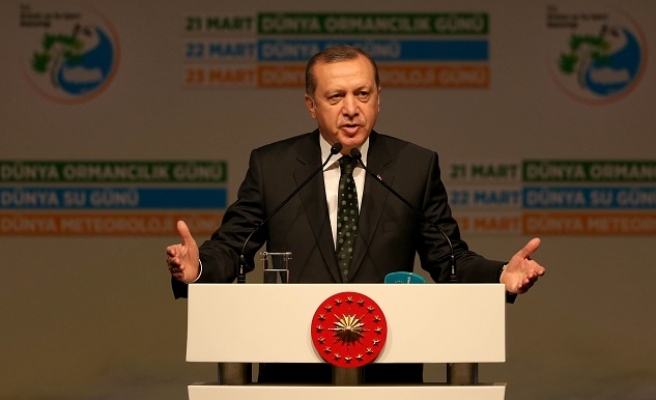 Turkey is facing one of its biggest and bloodiest terrorism waves in its history, Turkish President Recep Tayyip Erdogan has said.

Addressing a Forestry Ministry conference in Istanbul Monday to mark the World Forestry, Water and Meteorology Day, Erdogan said Turkey was facing attacks from the PKK terrorist group and its affiliates as well as ISIL since July last year.

About the best way to deal with the menace of terrorism, the Turkish president said, “As long as our nation keeps strong our unity, togetherness and solidarity, [we can prevail over terrorism]…This is the greatest antidote to terrorism”.

He also called on the need for developing new ways to fight terrorism. “I believe we will reach a result as soon as possible by developing new fighting methods against new terror techniques,” he said.

The PKK – also seen as a terrorist organization by the U.S. and the EU – resumed its 30-year armed campaign against the Turkish state since July 2015.

Since then, over 300 members of the security forces have been martyred and thousands of PKK terrorists killed in operations across Turkey and northern Iraq.

Turkey is also part of a U.S.-led coalition against terrorist group ISIL in parts of Iraq and Syria.

Recently, a number of terrorist attacks against civilians have taken place in the Turkish capital Ankara and Istanbul, which were blamed on the PKK and ISIL.

On Monday, Turkish president also issued a statement to celebrate Nevruz, which marks the coming of spring across several cultures around the world.

“Together with the revival of the nature, I wish Nevruz becomes a day which strengthens love and affection in our hearts along with the will of coexistence," Erdogan said.

“During these days, we need to own our unity and solidarity more than ever,” he said.

Nevruz marks the beginning of spring and has been celebrated in the Balkans, the Black Sea, the Caucasus, and most parts of Asia for hundreds of years.