Turkish foreign minister said "We have no hesitation on the removal of Assad," during a live TV interview 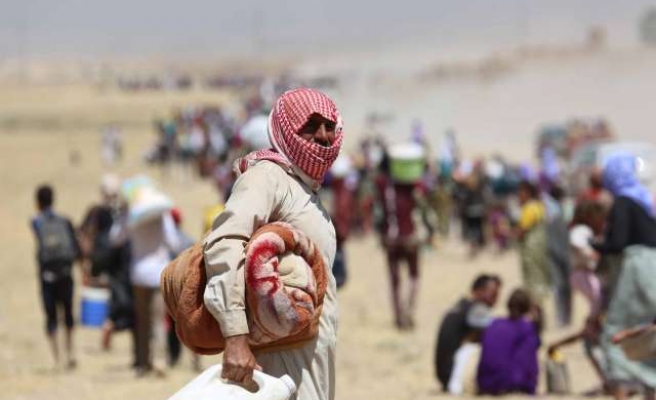 U.S. warplanes have been bombing ISIL forces in parts of Syria, but Assad's military has intensified its campaign against some rebel groups in the west and north that Washington sees as allies, including in and around Aleppo.

"Right now who is filling the void left by ISIL as a result of the coalition's air attacks? It is the regime," Cavusoglu told a news conference in Ankara.

"But there is not that much difference between the ISIL and the regime. Both kill cruelly, especially civilians. And neither hesitate to use whatever weapons are available to them."

Rebels and Syrian government forces hold parts of Aleppo, Syria's most populous city before the war. ISIL has seized territory from rival Islamist groups in a belt of territory north of Aleppo, threatening rebel supply routes.

Turkey has been a staunch supporter of the Free Syrian Army, an umbrella term for dozens of armed groups fighting against both Assad and ISIL. It has been pushing for the U.S.-led coalition to broaden its campaign to also tackle Assad.

"A weakening of the moderate opposition, the FSA backed by the coalition, ... will make the adverse situation in Syria worse and more unstable," Cavusoglu said.

"Fearful civilians are fleeing from areas where ISIL, terrorist groups and the regime are gaining ground. A possible advance in Aleppo would mean the influx of two to three million people to the Turkish border to seek asylum."

"We have no hesitation on the removal of Assad," Mevlut Cavusoglu said during a live TV interview.

CNN reported on Thursday that U.S. President Barack Obama was calling for a review of his nation's Syria policy, after realizing that ISIL could not be defeated unless Syrian President Bashar al-Assad was also removed.

Saying that Turkey has no serious differences of opinion with the U.S., Cavusoglu continued by saying "a clear policy on how to remove Assad has not arisen."

Cavusoglu added that the U.S. is hesitative to carry out a military operation in Syria.

Cavusoglu said "Without having a comprehensive policy, it is not possible to destroy this terrorist organization."

Amid relentless fighting, regime bombardments and ISIL attacks concentrated in the northern parts of the country, an estimated 1.5 million Syrian refugees, including some 190,000 from Syria's border town of Kobani, have sought shelter in camps across Turkey.

"We have spent more than 4.5 billion USD so far," Cavusoglu said.

Criticizing those who have said Turkey is doing nothing, Cavusoglu added: "We provide all kinds of contributions, but we shoulder the entire burden alone."