'Designating the PKK as a terrorist organization and then cooperating with the Syrian branch, the YPG, will only lead to more terror attacks,' Turkish FM says 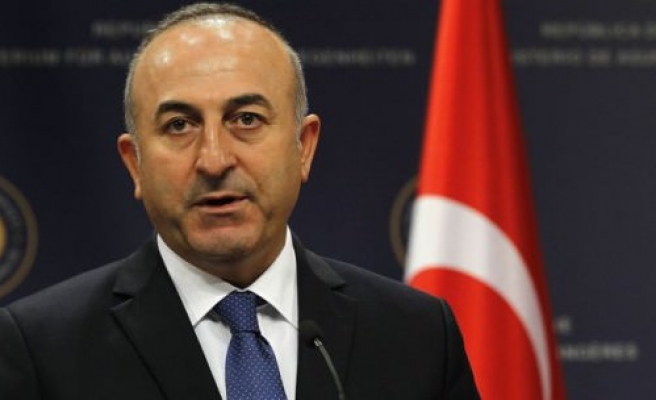 Turkish Foreign Minister Mevlut Cavusoglu said Tuesday that all countries need to show a "zero tolerance" policy toward terrorism, adding there could be no "double standards" about it.

Delivering remarks at George Washington University in the U.S. capital, Cavusoglu noted that there were no "good terrorists" and that the world should stop making distinctions between groups.

"Designating the PKK as a terrorist organization and then cooperating with the Syrian branch, the YPG, will only lead to more terror attacks," he said, referring to the U.S. position regarding the PKK and YPG.

Though the U.S. considers PKK a terrorist organization, it does not designate the group's Syrian affiliate, PYD, and the armed wing, YPG, as terrorist groups. Turkey designates all three as terrorists.

Reiterating that these groups were all terrorist groups, Cavusoglu said two recent deadly attacks in Ankara were conducted by individuals who came from Syria and were trained by the YPG.

"So there is no difference between PKK and PYD. Therefore, we can not treat PYD as a partner against ISIL," he said. "We can not actually rely on any other terrorist organization in our fight against ISIL."

Saying the PYD and YPG were not fighting for the future of Syria but declared a federation in northern Syria, Cavusoglu stated that even Russia -- which supported both groups in operations in the region -- did not support their announcement of building a federation.

He also noted that none of the coalition members objected to Turkey's emphasis that ISIL could not be destroyed only through airstrikes. However, he added this did not happen as no country wanted to put boots on the ground to battle the group.

"It is not the responsibility of only U.S. or Turkey and you can not ask Turkey to send boots on the ground just because Turkey is the immediate neighbor or ISIL is first and foremost direct threat to Turkish security," he stressed, adding that there were more than 60 countries in the coalition besides Turkey. "This is not fair."

The minister stressed that therefore, the coalition needed to have a "comprehensive" and "result oriented" strategy to defeat ISIL from Syria, Iraq and eventually from Libya as well.

Criticizing the understanding of making differences between terrorist groups, Cavusoglu stated that Turkey did not make distinctions among groups based on race or religion.

Giving the example of Boko Haram's mass murder of approximately 2,000 people in a Nigerian village last year, Cavusoglu said the world reaction to that was not the same as it was to Brussels or Paris attacks.

"Why? Because we have a different understanding; good terrorist, bad terrorist, secular one, radical one," he said.

Listing the terror groups that Turkey currently fights, including the PKK, Cavusoglu said some media reports used different rhetoric for Turkey's fight with the PKK by saying that it was fighting the Kurds in Turkey.

"PKK is not representing the Kurds. Our Kurdish citizens are not sharing the PKK ideology," he said.

"Our Kurdish citizens are more religious and conservative than ordinary citizens." When asked about Turkey's relations with its neighbors in the Middle East, Cavusoglu said Iran was Turkey's "immediate" neighbor but not an "easy" one.

Cavusoglu added that Iran's sectarian approach to countries like Iraq, Yemen and Bahrain destroyed the stability of these countries.

He said relations with Israel changed after the Gaza Freedom Flotilla that was a ship carrying humanitarian aid to Gaza and was attacked by the Israeli military in 2010, in which several activists were killed. Saying that one of three preconditions of Turkey to normalize relations has since been fulfilled, Cavusoglu noted that delegations were meeting over the other two.

He added that Turkey also wanted to normalize relations with Russia -- severed last September when Russia went into Syria and backed up President Bashar al-Assad.

Cavusoglu also criticized the UN Security Council saying it was hard to espouse that it represented the whole world, and stated that it should play a better role to meet the needs of the people on all continents.

When talking about the European Union, Cavusoglu said that the recent refugee crisis energized the relations and that both sides needed each other more than ever.

He noted that the international community has contributed only $462 million for refugees, whereas Turkey alone has spent more than $10 billion on refugees in Turkey since the war began in Syria in 2011. "This is like a joke," he said about international aid.

"This burden should be shared,” he added. “Everybody is (only) recognizing or commending that Turkey has built the best camps in the world."