It is a dangerous step towards destroying peace, order and security, Turkey's top religious body says 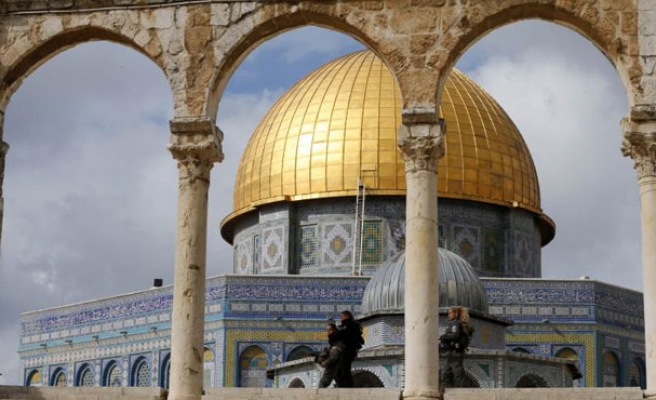 Turkey's Religious Affairs Directorate voiced concern in its Friday sermon over the U.S. President Donald Trump’s decision to recognize Jerusalem as the capital of Israel.

In its nationwide sermon, the directorate described Jerusalem as "the apple of our eyes", saying it is a city where many prophets strived for the cause of Tawhid (Oneness).

"It is a sacred and blessed city with its name and environs."

"Many prophets such as Ibrahim, Yaqub, Musa, Sulayman and Isa lived in Al-Quds and its surrounding region, which has been the cradle to many civilizations for thousands of years," it said, adding that the last sacred guest of Jerusalem was Prophet Muhammad with the event of Isra and Miraj.

"Moreover, the first kiblah of Islam, Al-Aqsa Mosque, is in Al-Quds," said the directorate in the sermon.

Although the city had been the center of peace and tranquility when Muslims governed it with a fair and just rule for many years, the directorate said "the city has been crestfallen for a long time and bleeding for years."

"Al-Quds is our bleeding wound and unceasing pain today. Al-Quds has suffered from all kinds of attacks and ceased to be the city of peace. Guns keep firing in the city of prophets. Innocent people are being murdered."

The directorate also said that those living in and around Jerusalem were exposed to inhuman practices such as oppression, violence and isolation. People’s freedom of life, belief and thought were also attempted against without mercy and their identity and character, dignity and honor are targeted, it said.

It was not long ago that believers were kept away from Mosque of Aqsa, the sermon said, while today they are trying to invade Al-Quds.