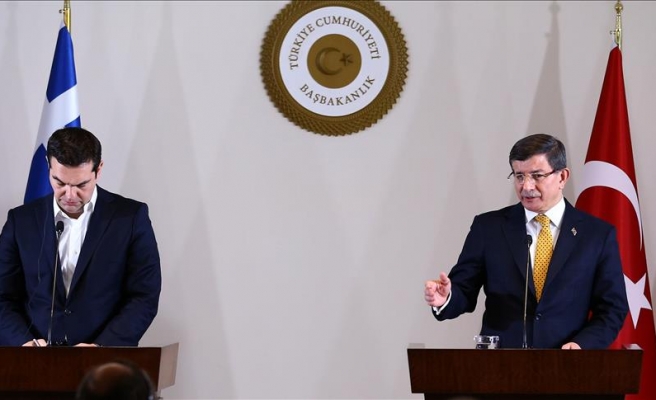 The prime ministers of Turkey and Greece pledged further cooperation Tuesday night, less than 24 hours after an EU-Turkey summit heralded as the first step in resolving the refugee crisis.

In a joint news conference, Davutoglu said Turkish nationals would be allowed to travel without a visa in the EU from June, which is part of the concessions agreed by Turkey for accepting the return of “irregular” migrants from the EU.

Ankara has requested 6 billion euros ($6.6 billion) to meet the needs of Syrian refugees in Turkey and asked for its EU accession process to be fast-tracked.

Davutoglu also confirmed that for every Syrian refugee returned to Turkey, another would be resettled in the EU from Turkey. The plan is aimed at tackling people smugglers who send refugees on dangerous sea journeys from Turkey to Greece.

He said the Aegean Sea should not be a “drama sea” but somewhere where “happiness is shared”.

More than 440 people have lost their lives in the Aegean since the start of the year, according to the International Organization for Migration.

Davutoglu outlined a number of travel ventures between the two countries, including a high-speed rail link between Izmir, Istanbul and Thessaloniki, the start of direct flights from Ankara to Athens and a ferry service connecting Izmir and Thessaloniki.

He said the neighbors hoped to see trade grow from around $6 billion to $10 billion, although he did not give a time frame.