During a visit to the Turkish capital, Greek foreign minister made a joint statement with his Turkish counterpart 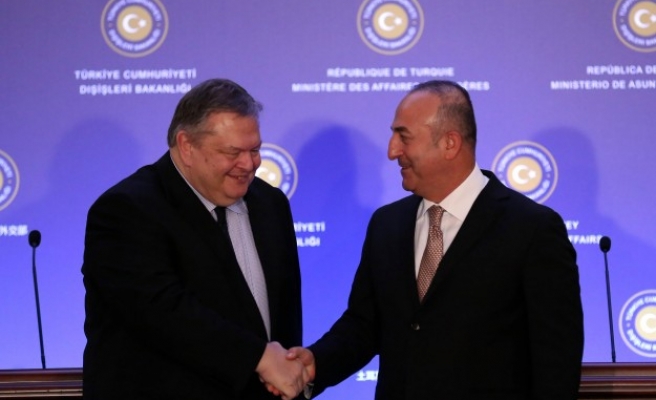 Turkey and Greece are supportive for the restart of negotiations between Turkish and Greek Cypriots on how to reunify the divided eastern Mediterranean island, the two countries' top diplomats has said.

Appearing at a joint press conference Saturday in the Turkish capital, Ankara, Turkish Foreign Minister Mevlut Cavusoglu and his Greek counterpart Evangelos Venizelos called for the resumption of of reunification talks which came to a halt when the Greek-Cypriot administration suspended them on Oct. after Turkey sent a warship to monitor an oil-and-gas exploration mission off the disputed Cyprus coast.

Turkey and the government of the Turkish Republic of Northern Cyprus have strongly opposed any "unilateral" move by the Greek-Cypriot administration to explore any hydrocarbon resources around the island, saying its natural resources should be exploited in a fair manner under a united Cyprus.

Making a joint press statement with Venizelos, Turkish Foreign Minister Mevlut Cavusoglu said, "It is our desire to find a solution for the people of both sides to protect their rights."

Reiterated Turkey's goodwill in negotiations, Cavusoglu said: "We hope that the negotiations will start soon and a permanent solution on the island can be achieved."

Saying that the talks between both sides should start immediately, Venizelos said: "We need to solve this problem for the development of relations between Turkey and Greece."

Venizelos added international law constitutes the basis of the cooperation between the two countries.

Cavusoglu said that the desire is to avoid any step that would escalate tensions in the region.

Senior Turkish and Greek officials will meet in the third edition of the "High-Level Cooperation Council," which will take place in Athens on Dec. 5-6.

The Greek Cypriot administration is a member of the EU and is internationally recognized except by Turkey -- the only country which recognizes the Turkish Republic of Northern Cyprus.