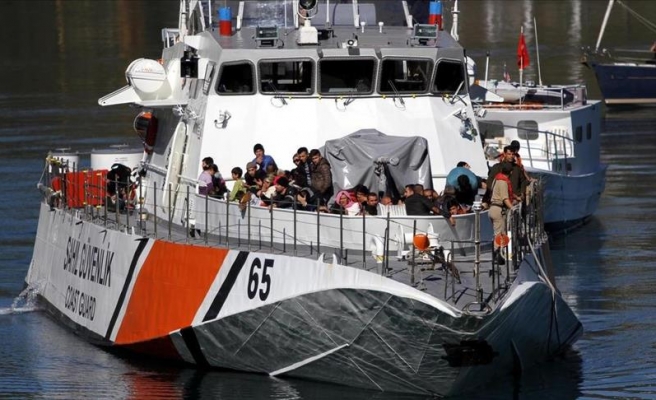 A Turkish official has confirmed that a group of migrants from Myanmar were among more than 350 people picked up at sea by the coastguard over the weekend as they attempted to travel to Europe.

The local governor -- who did not wish to be named as he was not authorized to talk to media -- told Anadolu Agency by phone Monday that the migrants are presently being housed in Izmir province on Turkey's western Aegean coast.

When asked how many were from Myanmar, whether they were men, women, or children, and where they had set off from the man said that he could not give out that information.

"They are not allowed to see any aid agencies or other institutions because the Turkish government is handling the situation right now," he added. "It is a normal legal procedure. We do it all the time."

He said that repatriation centers and Turkey's Foreign Ministry would now be handling their case.

"We cannot provide you with any information because their official process is being handled by the government," he underlined.

On Sunday, the same unnamed official told Anadolu Agency that a coastguard vessel had spotted the boats around 6.5 kilometers (4 miles) off the district of Dikili, and the occupants transferred to Dikili where they were being held in a sports center.

He said they had been trying to reach the Greek island of Lesbos -- around 95 kilometers from Dikili -- and that those on board the boat were "unusual", as migrants attempting to get to Europe are predominantly Syrian.

Local media have reported that many of those on board were Rohingya Muslims from Myanmar.

Phones rang unanswered at Myanmar's embassy in Ankara on Monday when an Anadolu Agency correspondent called to seek clarification.

The Rohingya -- an ethnic Muslim minority from Myanmar who say they face religious persecution at home -- have for years utilized smugglers to take them by boat from Bangladesh to Thailand and beyond.

Many of them, however, have fallen victim to kidnappers, smugglers keeping them in camps in Thailand until families shelve out ransoms for their imprisoned relatives from back home.

On March 18, Turkey and the European Union signed a deal that sees all refugees and migrants arriving in Europe via Greece returned to Turkey after individual assessments that are in full compliance with international law.