Turkey in midst of 'new independence struggle' in region 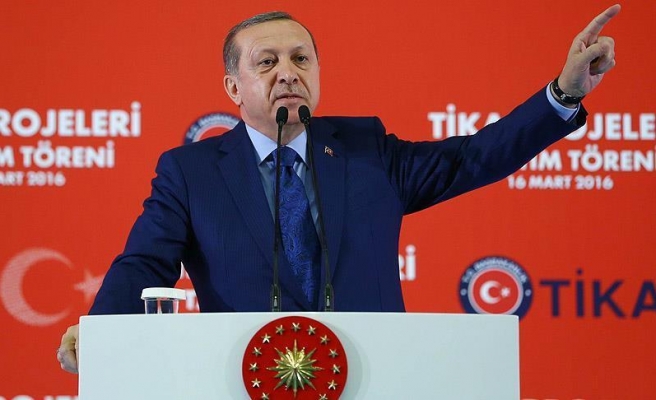 Turkish president has said Turkey is in the midst of a new struggle of independence in the region, warning that those who tried to break up the region a century ago are now again seeking to achieve their designs.

In his address at the Turkish Cooperation and Coordination Agency in Ankara Wednesday, Turkish President Recep Tayyip Erdogan said: “The struggle we are executing today in our country and our geography is actually a new struggle of independence. Those who became mad after failing to mutilate the body of this geography and destroy its spirit a 100 years ago are now seeking to achieve this [again] today”.

Referring to the century-old history when world powers of that time carved up new lines in the region, the Erdogan said: “In those days, we couldn’t prevent the setting of artificial borders between us. However, today, we will not give in to the mutilation of our spiritual unity”.

Turkish president also slammed Western dailies and columnists for suggesting that solution to Turkey’s problems was his ouster.

"We hear the same declarations both from Western dailies and the ones at the top of Kandil Mount [ in northern Iraq where PKK terrorists remain holed up]. What are they saying? 'Turkey can be stabilized only if Erdogan goes'. You can see some of the columnists saying these same sentences. [But,] look at the time when Erdogan came and look at the situation in Turkey now," he said.

Erdogan also said terrorist groups such as the Syrian PYD and its militant group YPG have only limited support of the Kurdish people in Syria. He hinted that such groups had support from Western countries.

"The forces who feed these terrorist organizations are different. Most of our Kurdish fellows along with Turkmen and Arab brothers in Syria have been fighting the Syrian regime and its supporters. When you look at the weapons these terrorist groups have been using, you can see signs of Western countries," he said.

He also questioned the sincerity of the West in countering terrorism.

"It’s not important for us that you declare this and that organization as ‘terrorist’. What are you doing to combat them? What kind of raids have you been carrying out on their shelters? Are you deporting the terrorist members you caught? What is the monetary source of these terrorist groups?" he asked.

Turkish President Recep Tayyip Erdogan also said the one who stands by them in the fight against terrorism is a friend, while the one who takes a stand against them is the enemy.

In remarks made at a separate address to a group of Mukhtars (Turkish for neighborhood administrators) at the presidential complex in Ankara Wednesday, Erdogan said the people who use the “same language” as terrorist organizations are terrorists themselves.

He also lashed out at some media outlets for defending the recent deadly attack in Ankara. "Some incompetent greedy people in our country are miserable, immoral and dishonest because they use the painful incident in Kizilay for their self-interest," he said.

A car bomb attack in Ankara’s central Kizilay neighborhood Sunday evening hit a major public transportation hub, killing 35 people and injuring dozens others. One of the suicide attackers was identified. Involvement of a suspected second attacker is also investigated.

The Turkish president said no mercy will be shown to terrorist organizations after the Ankara attack.

"I think the people, who give the opposite messages, are on the same side with the ones, who carry out services for the terrorist organization," he said.

Erdogan also said that there is a need for a “national coalition” against terrorist organizations and all threats against Turkey.

"Let's create this big consensus and association right now and give the people, who attempt against our lives and our future, a hard time," he said.

However, he clarified that this call for consensus was not for all Turkish political parties and groups.

"I do not regard the members of the party, which works like the terrorist organization's arm, as legal political actors any more. Thus, this call is not for them, it is for the other parties," he said. The leftist opposition party HDP was often accused of acting as a political wing of terrorist PKK.