Both countries are examples for 'strong democratic values'. 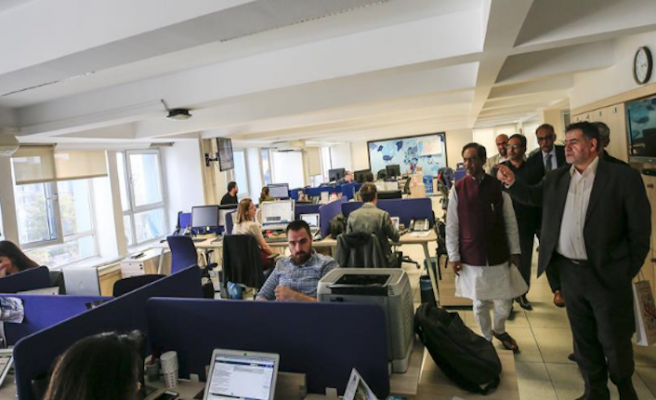 An Indian delegation Wednesday called on Turkish and Indian governments to spread the strong democratic values across the world.

“India and Turkey have to strengthen the democratic values around the world,” the delegation said during their visit to Anadolu Agency headquarters in capital Ankara.

Both countries feature as an example for “strong democratic values”, they said.

Touching people-to-people relations between both countries, they said: “There has been a very strong relation between Turkish and Indian people. And the evidence is the Urdu language itself, which is a mix of Turkish and Persian.”

On the close relation between the languages of Turkish and Indian, particularly Urdu, they said at least 10,000 or more words are common in Turkish and Urdu.

“So we can improve our linguistic and cultural relationship,” they said.

“We should have cultural centers in Istanbul and Ankara and some big cities,” they added.

They also said there should also be Turkish cultural centers in the Indian cities of New Delhi and Mumbai.

Stating that many Indian tourists have visited Turkey recently, they added: “It’s a beautiful place, historically important, every stone in Istanbul is telling us a story.”

The delegation asked Anadolu Agency to enlarge its operations in India, citing positive sides of the country.

They also addressed the “indigenous Turkish economy”, saying: “We know that in many fields it is self-sufficient and the world leader.”

Giving construction industry as an example, they added: “If you want to engage the Indian people and particularly Indian Muslims, you can invite them to country.”

Also calling on Turkish government to “open visas”, they said that this would give “a big boost to people-to-people relations”.