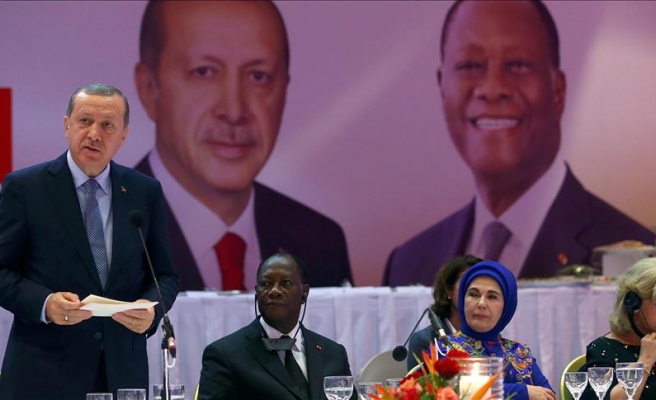 Turkey aims to increase its trade volume with Ivory Coast to a billion dollars by 2020, Turkish president said during his first visit to the West African country.

Turkish President Recep Tayyip Erdogan made the announcement alongside his Ivorian Coast counterpart Alassane Ouattara at a joint news conference Monday after bilateral meetings in the country’s capital, Abidjan.

“This is a victory for democracy,” the Turkish president said.

Ouattara, a candidate of the Rally of Houphouetists for Democracy and Peace (RHDP), got elected for a second and final term with 83.66 percent votes in the Oct. 25 election.

The Turkish president hoped that the trade volume between the two countries would increase over the years. “Trade volume between Turkey and Ivory Coast was $330 million last year. It will reach $390 million in 2016. Our goal is to increase it up to $1 billion by 2020,” he said.

He noted that bilateral ties began in 1964, while the Turkish embassy in Abidjan opened in November 2009.

Turkey continues its humanitarian aid to the Ivory Coast through the Turkish Cooperation and Coordination Agency (TIKA) and Turkish Red Crescent.

"Turkey has provided higher education scholarships to 66 Ivorian Coast students and that number may be increased," Erdogan added.

He said both countries reached agreements in the fields of investment, defense industry, medicine, information technology and telecommunications during his visit.

Erdogan said he felt like he was in his second home during his visit to the Ivory Coast.

"I am happy because I am the first Turkish president to visit Ivory Coast officially," Erdogan said.

"This visit shows a stronger relationship between the two countries," he said.

"We have signed nine agreements and it shows our desire to strengthen our relations further," he added.

“We discussed to advance the fight against terrorism,” he said.

Erdogan also reiterated his opinion about the cessation-of-hostilities agreement in Syria.

“A cease-fire has not been reached in other regions of Syria, either. I hope we reach a cease-fire in the whole Syria soon and peace is ensured,” he said.

Last week, a cessation-of-hostilities deal was agreed on by Washington and Moscow. It is the latest in a series of diplomatic efforts ostensibly aimed at ending the conflict, which will soon enter its sixth year.

ISIL and al-Qaeda’s Syria affiliate, al-Nusra Front, along with other unspecified groups designated terrorist organizations by the UN Security Council, were not included in the agreement.

The Turkish head of state will also visit Ghana, Nigeria and Guinea during his current Africa tour.

Turkey and Ivory Coast signed new agreements in the fields of defense, health and information technologies.