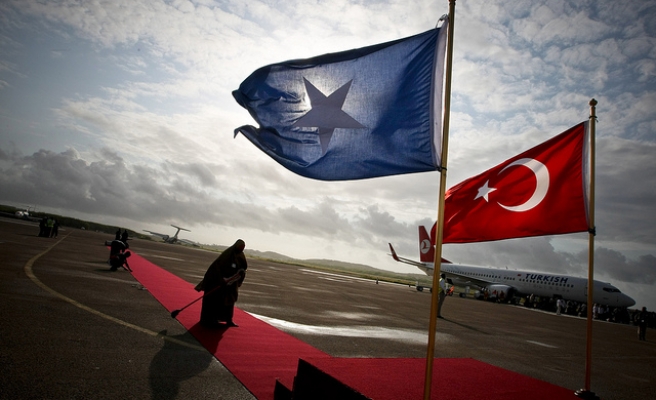 “This number should be accepted as a beginning,” Elvan said during his speech at the Turkey-Somalia Business Forum held by the Foreign Economic Relations Board of Turkey (DEIK) in Istanbul.

Turkey has been one of the most visible foreign countries to help war-torn Somalia rebuild its crumbling infrastructure.

Ankara has launched various development and infrastructure projects in the country in recent years, ranging from health and sanitation projects to the construction of roads and buildings.

Turkey will encourage "entrepreneurs to make investments in fishing, construction and agriculture fields in particular in Somalia,” Elvan said.

“We believe in Somalia’s development with all our hearts. We have decided to stand together with Somali and its people,” he added.

Turkey's trade volume with African countries has increased to $19.4 billion in 2015, while it was only $4 billion in 2000, Omer Cihad Vardan, president of Foreign Economic Relations Board of Turkey, said at the forum.

“We, as businessmen, will always support our brothers in order to establish a peace and a government in Somalia,” Vardan said.

“We are ready to give every kind of support in order to make Somalia’s resources to be used in its economy,” he added.

Turkish aid agencies are also very active in the country.

Turkey’s Humanitarian Relief Foundation (IHH) has built more than 6,000 wells in Africa since 1992, according to the foundation’s deputy chairman, Hasan Aynaci.

According to the UN, more than 13 million people across the Horn of Africa have been badly affected by drought and more than 4.7 million in Somalia are in need of humanitarian assistance.