The 1992 massacre of 613 Azeri citizens is a bloody atrocity, a crime committed against humanity, participants say. 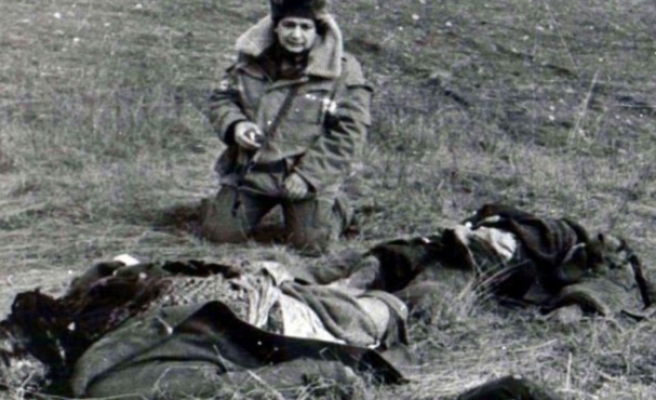 A conference on the 'Khojaly Massacre' was held in Ankara on Wednesday with the participation of Turkish parliament members and academicians.

The conference entitled “A international-law based look at the Khojaly Massacre - the violence of the century,” aimed to examine and consider the 1992 massacre in Azerbaijan.

Armenian military forces took over the town of Khojaly in Nagorno-Karabakh on February 26, 1992, battering it with heavy artillery and tanks, assisted by the 366th CIS Infantry Regiment.

The two-hour offensive killed 613 Azeri citizens, including 106 women and 63 children, and critically wounded 487 others.

Delivering a speech at the conference, Burhan Kuzu said the Azerbaijani people were massacred because they were Muslims and belonged to an ethnic group.

Turkish parliament members of the ruling Justice and Development Party Burhan Kuzu and Necdet Unuvar participated in the meeting.

"The Khojaly massacre is a bloody atrocity, a crime committed against the humanity," said Hikmet Eren, the head of Eurasia Economic Relations Association.

Armenian soldiers occupied 20 percent of Azerbaijan territory in Nagorno-Karabakh, adding that Turkey and Azerbaijan should cooperate to tackle the issue, Eren said.

Parliament member Necdet Unuvar, who is also the chief of the Turkish – Azerbaijan inter-parliamentary friendship group, said that Khojaly massacre is one of the greatest sorrows the world had witnessed.

“The massacre should always be remembered,” said Unuvar, adding that Turkey shares the feelings of Azerbaijani people during their good and bad times.

The conference was organized with the cooperation of the Eurasia Civil Society Association, the Eurasia Economic Relations Association and non-governmental organizations from Azerbaijan.

Armenia's parliament voted to recognize that independence and that forced the evacuation of over 200,000 ethnic Azerbaijanis from Armenia. Thousands of Azeri civilians lost their lives in the resulting conflict.

The conflict between Turkey’s two eastern neighbors, Armenia and Azerbaijan over the disputed Nagorno-Karabakh territory has dragged on for decades. The often-violent conflict eventually saw Turkey close its border with Armenia in 1993.