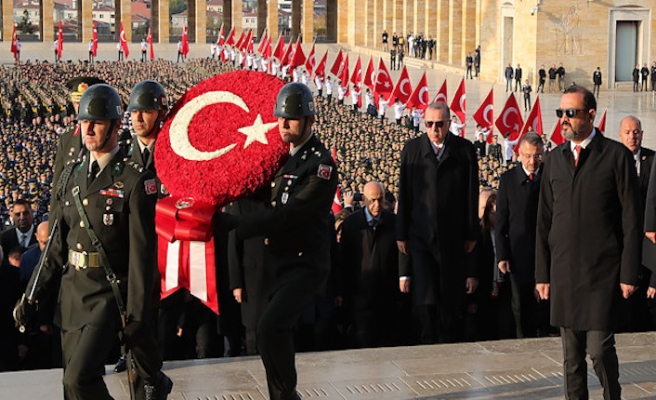 Erdogan placed a wreath on Ataturk's mausoleum and a moment of silence was held and Turkey's national anthem was sung by Erdogan and the delegation.

He also left a written message on the book of commemoration to pay tribute to Ataturk.

"Despite malicious attacks at home and abroad, we are walking on the path with a determination to make Republic of Turkey one of the strongest and prosperous countries in the world. Rest in peace," Erdogan said and added that Turkey's latest pride - Istanbul Airport - was inaugurated in the 95th anniversary of the republic.

At full capacity -- with the completion of all four phases with six runways -- Istanbul Airport is set to become a major global aviation hub by hosting more than 100 airlines and flights to over 300 destinations around the world.

The €6 billion ($7.2 billion) first stage of the airport, which was built in nearly three years through a public-private partnership model and officially opened on October 29, is one of a series of mega-projects planned for Turkey’s 2023 centennial.

After the state ceremony on Saturday morning, Anitkabir has been opened to the public.

At 9.05 a.m. (0605GMT) sirens wailed to mark the exact moment of Ataturk's death at the age of 57 in Istanbul’s Dolmabahce Palace.

Around the country, people stopped in the streets or stood silently at their workplaces to remember Ataturk.

The Turkish president previously on Friday commemorated the 80th death anniversary of Mustafa Kemal Ataturk, "the founder of our republic".

In a commemorative message marking the day, Erdogan said, "Gazi [Veteran] Mustafa Kemal, who managed to unite our nation around a common ideal in the difficult path he took with endless confidence and belief in the nation, has crowned our war of independence with the foundation of our republic."

According to the president’s office, Erdogan said in his message: "While Turkey keeps on strengthening and growing in stability as we celebrate the 95th anniversary of our republic, we should never forget that our ancestors always overcame all obstacles for unity and solidarity, that they sustained the national and spiritual values under all circumstances, never gave up what they believed in and always protected their independence and future at the cost of their lives."