Turkey not to allow 'terror lairs' on southern border 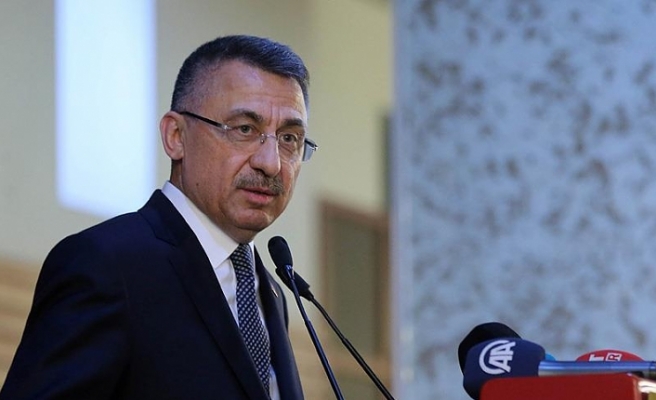 Turkey’s vice president said on Saturday that Ankara would "not allow" terrorist lairs to exist across its southern border, referring to the YPG/PKK terror group in Syria.

"Just as the terrorists in Jarablus and Al Bab could not be escape destruction, the terrorists threatening us on our southern borders will not be able to escape the fate that awaits them," Fuat Oktay said at a meeting with business and non-governmental organizations in the Black Sea town of Corum.

Praising the progress achieved by Turkey’s defense industry, Oktay underlined that Turkey was at least among the World’s top four countries in the production of surveillance and armed unmanned aerial vehicles (UAVs).

He added that Turkey would look to be self-sufficient in its defense hardware.

"We’re engaged in serious efforts regarding warplanes and UAVs," he said.

In recent days, Turkish officials said Turkey has completed all preparations for an operation east of the Euphrates in northern Syria which Ankara said would preserve territorial integrity in the war-torn country.

Since 2016, Turkey’s Euphrates Shield and Olive Branch operations in northwestern Syria have liberated the region from YPG/PKK and Daesh terrorists, including Al-Bab, Afrin and Azaz, making it possible for Syrians who fled the violence there to return home.

In its more than 30-year terror campaign against Turkey, the PKK -- recognized as a terrorist group by Turkey, the U.S. and the EU -- has been responsible for the deaths of some 40,000 people, including women and children. The YPG/PYD is the group's Syrian branch.