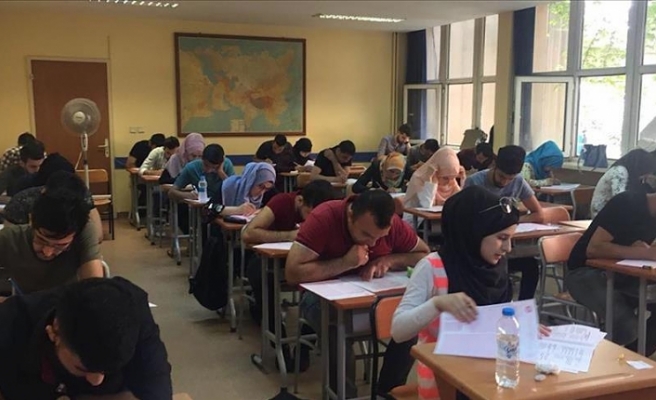 Turkey has become one of the top destinations for international students as the country offers tremendous opportunities for learning.

The importance of the country -- located at the crossroads of three continents – has also become clearer in recent years both economically and politically.

The government has announced a vision to draw around 500,000 foreign students by offering attractive scholarships.

According to the Turkish Council of Higher Education, around 115,000 foreign students are currently studying at Turkish universities, putting the country among the top 10 host nations for international students.

Under the Turkiye Burslari (Turkish Scholarships) program, around 5,000 students from across the world are accepted each year to pursue undergraduate, Masters and PhD studies at Turkish universities with full-funded scholarships.

Faiz Bin Ali, a Malaysian graduate from Istanbul Commerce University, told Anadolu Agency that the reason he chose to study in Turkey was because the country is a center for trading and has an “amazing culture”.

Ali, who is the director of a trading and consulting firm, completed his Master’s degree in international trade in 2016.

He was active with non-governmental organizations and attended seminars, meetings and corporate training.

“Turkey was my dream destination due to its sociocultural, historical and political significance,” said Noushad MK, assistant professor for the Turkish department at Jamia Millia Islamia University in New Delhi.

Noushad completed his studies at Istanbul University in 2012 and returned to India after the “fulfilment of my educational and personal dream”.

“The cultural and historical richness of the country amazed me [enough] to make Turkey my second home,” he said.

“Turkey is unique in its cultural and historical richness. The perception of common people toward outsiders, especially Indians, was also a significant reason for my selection of Turkey. Turkish people are not racist in general. They don’t treat Indians as people from a third world country.”

As a citizen of India, home to over 1.3 billion people, life in Istanbul was easier for Noushad in comparison to his own country.

“Life was fast and expensive compared to India. Istanbul is too crowded according to local residents, but I found it ok in comparison to Delhi, where I lived. The people and their treatment made me feel easiness in Turkey that I may not feel elsewhere.”

During his student life, Noushad, a Muslim from the northern part of India, experienced full religious freedom and security in Turkey.

Muhsin Kurtis, a Macedonian who studied econometrics at Marmara University in Istanbul between 2004 and 2009, told Anadolu Agency that Turkey has all the characteristics of an Eastern civilization, which led him to choose the country for higher studies.

“I feel myself in Turkey as I am living in my own motherland,” he said.

He recalled having some difficulties with the residence permit process while living in Turkey, but the issue was mostly resolved with the establishment of the Directorate General of Migration Management in 2013.

He noted that Turkey is full of social activities and youth-friendly events.

“In addition to sports and travelling with my countrymen, we organized study tours and some other activities.

“It is a privilege to study in a country that is the cradle of civilization.”

Fennan Mohammad Bashir, an international graduate from Istanbul Technical University, said he completed his studies at more than one ‘university’ in Turkey.

“Students’ relations with local people and numerous extra-curricular activities allow international students to graduate from more than one university. They have knowledge beyond their formal education within four walls.

“Any country that is not your motherland would not be easier. But as we consider Turkey our own country, I did not face any problems during my study life in Istanbul,” he said.

“I’m not saying that education or universities in Turkey are the world’s best, but if we evaluate it comprehensively – the education, sociocultural atmosphere – I can say yes, it is worth studying in Turkey,” added Bashir, who is now an electrical engineer and runs his own projects in Ethiopia.

“During my studies in Turkey, I acquired a wealth of experience outside of my formal education due to the vibrant characteristics of Turkish society.

“I don’t think my education would have been so beneficial if I studied in Europe or America rather than Turkey.”

All of the graduates advise prospective international students to establish deep dialogue with Turkish people and to interact with them in order to properly utilize their time in Turkey.

“If a student understands Turkish society very well, he or she can easily adapt to life in Turkey,” said Bashir.

“Don’t limit your life to school, books and the library. You have to get out, immerse yourself in Turkish society.”

He also advised international students to learn the Turkish language during their stay.

“Be active, social. Learn the language, history, and culture of the people," said Noushad, echoing the advice of other graduates.

"When one knows the history of Turkey, he or she can enjoy the social life much better. Turkish people respect other cultures. They enjoy diversity rather than rejecting or challenging it. This gave me a positive vibe to stay in Turkey."