Turkey and EU are paying price for Syria crisis even though they are not responsible for it, Turkish PM says 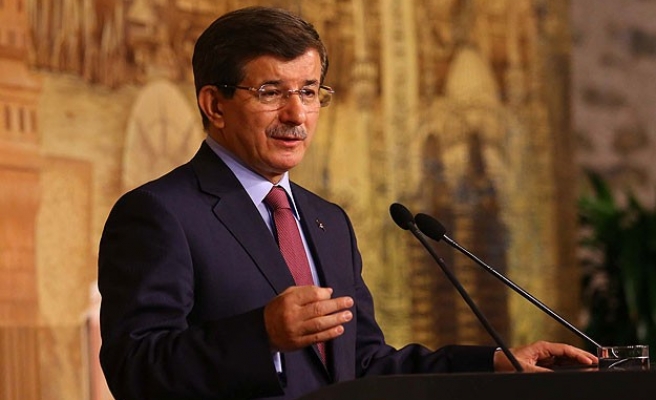 The Bashar al-Assad regime and its international backers are responsible for the ongoing Syrian crisis that has so far claimed the lives of hundreds of thousands of people since 2011, Turkish premier said Thursday.

Addressing a joint press conference following his meeting with European Council President Donald Tusk at the Cankaya Palace in the capital Ankara Thursday, Turkish Prime Minister Ahmet Davutoglu said: "Neither Turkey nor European Union is responsible for the Syrian crisis.

“Those who are responsible for the Syrian crisis are the [Assad] regime oppressing its nationals, and terrorist organizations...and some international actors that support this regime and those who support these terror organizations."

But despite the fact that Turkey and EU were not responsible for the crisis, they continue to suffer the consequences of it.

"Turkey and EU are paying its price. There are 2.7 million Syrian brothers in Turkey. Hundreds of thousands are in a great effort to cross into Europe," he said.

The Turkish premier also slammed human traffickers who were exploiting the dire situation of the refugees. He said there were "abusers" from other countries benefiting from the Syrian stalemate.

He said that during his meeting with Tusk, both sides agreed that human smuggling of any kind was a crime against humanity and they discussed a joint action plan to deal with the issue.

"We agreed on the need to swiftly implement priority actions under the EU Trust Fund for Syria and the Facility for Refugees in Turkey based on a shared needs assessment," he said.

Stating that the EU appreciates a good and growing cooperation with Turkey to prevent irregular migration, Tusk said: "We welcome stepped up efforts of the Turkish coastguard, intensified police controls to combat human trafficking and the tightening of visa requirements".

"At the same time, we agree that the refugee flows still remain far too high and that further action is needed. It is for Turkey to decide how best to achieve such a reduction,” he added.

“To many in Europe, the most promising method seems to be a fast and large-scale mechanism to ship back irregular migrants arriving in Greece. It would effectively break the business model of the smugglers,” he added.

He also recalled the joint action plan with EU leaders agreed in Brussels on Nov. 29, 2015.

"First [point in the plan was the] acceleration of Turkey’s European Union [accession] process; thus later a [new] chapter was opened, [which] entered into effect, which would pave the way for the opening of other [policy] chapters [required in the process],” he said.

"Second key issue is the strong will that emerged regarding the entry of [Turkey into the] Schengen system and visa exception," he added.

The prime minister also said the third main issue was about the Customs Union. "There was a need for a new content in the Customs Union [agreement] with the appearance of [new] terms in the Transatlantic Investment and Trade Partnership. Negotiations on this issue have started," he said.

The fourth issue was about challenges in the international arena, primarily in Syria, which drew a new line in Turkey-EU relations.

"In this [matter], the refugee issue led to an environment in which we must work more intensively as it is an issue Turkey and Europe have jointly faced," Davutoglu added.

Davutoglu thanked the people of Diyarbakir for ignoring such calls "for violence and terrorism," and praised them for "revealing a solemn attitude for honor and peace of Diyarbakir".

Demirtas on Monday had urged Diyarbakir residents to march towards Sur district and protest a curfew imposed there amid the security operation.

"People of the region know well what peace and stability of Turkey means. They also reveal a very cautious attitude against separatist terrorist organization that wants to drag Turkey into an engulfing fire," Davutoglu said in reference to the PKK terrorist group.

Turkey's southeast has been the scene of significant military operations since December against the terrorist PKK group, which renewed its armed campaign against the Turkish state in late July 2015.

Since then, more than 280 security forces personnel have been martyred and thousands of PKK terrorists killed in operations across Turkey and northern Iraq.