‘We have to be shoulder to shoulder against those who are committing war crimes,’ PM Davutoglu says at Syria Donors Conference in London 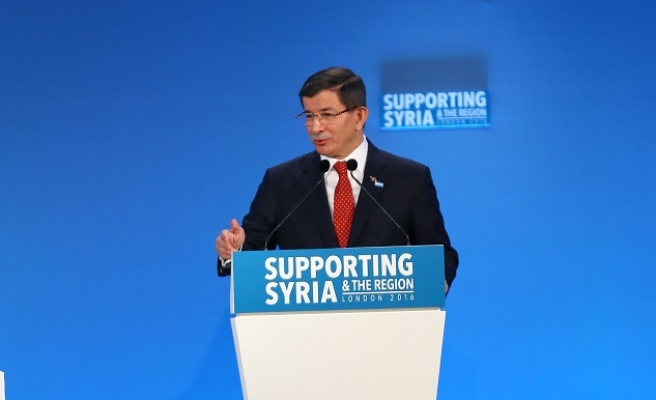 Turkish Prime Minister Ahmet Davutoglu has defined ISIL and Syrian President Bashar al-Assad’s regime as “two enemies of humanity” in his address to the Syrian Donors Conference in London on Thursday.

Davutoglu said that the refugees in Turkey escaped from air bombardment by regime or by "pro-regime foreign forces”.

He said ten thousand new refugees were waiting on the border near Kilis province due to airstrikes on Aleppo, and “60 to 70 thousand people in the camps in North Aleppo are moving towards Turkey.”

“My mind is not in London but in the border, how to relocate these people coming from Syria," Davutoglu said.

The prime minister said Ankara would maintain its open-door policy toward Syrian refugees no matter what happens in Turkey, “because we have much bigger heart than our budget. We have to be shoulder to shoulder against those who are committing war crimes.”

Davutoglu revealed that Turkey has spent 10 billion dollars only for the refugees who are in the camps, noting that the estimated figures add up to a much higher total if they also account for people outside the camps.

Leaders of governments, NGOs and the members of civil society met in London on Thursday to raise more funds in aid of those affected by the crisis in Syria.

The one-day Syrian Donors Conference -- jointly hosted by Britain, Germany, Norway, Kuwait and the United Nations -- was called late last year after calls were made for governments and international bodies to work better together to solve protracted crises.

Three previous conferences were hosted by Kuwait for the UN's Syria appeals. The first conference was held in 2013 and raised $1.5 billion. The second conference raised $2.4 billion in 2014, and the third $3.8 billion in 2015.

Participants are urged to raise new funding for those affected by the Syrian civil war -- a crisis that includes Syria’s neighbors as well as the conflict zone. The conference aimed to raise $9 billion for the Syrians in need.

Turkey, a key country hosting more than 2,5 million refugees, has alone spent more than $10 billion for humanitarian assistance, according to the official numbers announced last week.

There are 13.5 million people in need of humanitarian assistance in Syria, while the war has created 4.59 million refugees and resulted in the deaths of over 250 thousand people. The UN has set its funding requirements for the 2016 Syria response (Syria and surrounding countries) at US$7.73 billion.

The conference also considers ways to create job and education opportunities for people forced away from their homes.