'We are not asking (for) money, we are not negotiating (for) money... we hope the next steps will be concrete steps to address this issue,' PM Davutoglu says 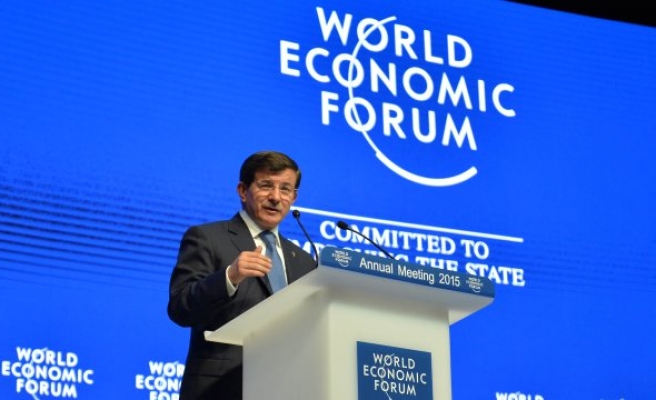 Speaking at the annual Davos summit of economic and business leaders, Davutoglu said he wouldn't even ask Merkel about the 3 billion euros in financial aid the EU promised last year to grant to Turkey in return for stemming the flow of refugees into the bloc.

"We are not asking (for) money, we are not negotiating (for) money... For us, it's a humanitarian duty, therefore the problem is not financial assistance," Davutoglu said.

"We will be discussing these with my dear colleague Merkel and we hope the next steps will be concrete steps to address this issue," he added, speaking in English.

Under increased pressure to reduce the number of refugees arriving in Europe, Merkel will host Davutoglu in Berlin for a joint meeting of key ministers from both governments.

EU officials have complained Turkey was not doing enough to limit the numbers crossing the Aegean Sea despite the landmark deal in November providing Ankara cash as well political concessions in return for its cooperation in tackling Europe's worst refugee crisis since World War II.

Davutoglu suggested Turkey was doing more than its share, pointing to a government decision last week granting work permits to refugees, which was not part of the EU deal.

He also said that Turkey, which is home to more than two million Syrian refugees, has so far spent around 10 billion dollars helping them.

"We can spend some more for the poor orphans, victims of the Syrian tragedy," he said.

"But it's not only a German issue, it's not a Turkish issue, and now not even a Syrian issue. It's a global issue."