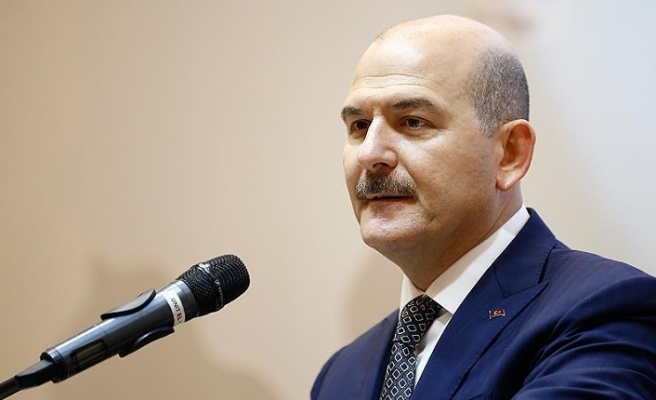 Turkey prevented some 347 terror acts in 2018, the country's interior minister said on Wednesday.

Speaking at a workshop on counter-terrorism in Ankara, Suleyman Soylu stressed on the decrease of terror acts in Turkey.

"Last year, we prevented 697 terror acts -- which became 347 this year. There is a tremendous struggle and serious success that can't be ignored," Soylu said.

Soylu pointed out that the world was introduced with the concept of "global terror" with the September 11 attacks in the U.S., which was termed a global terror act by the country.

The U.S. then said the fight must be turned to a global one and occupied Iraq and Afghanistan, Soylu added.

Turkish interior minister said there was an increase in acts of terrorism worldwide between 2002-2007.

Soylu underlined that especially after Turkey's Euphrates Shield and Olive Branch operations in northern Syria, the number of global terror acts declined after 2014.

He said Turkey captured some foreign nationals attempting to cross the Turkish borders to go to the Middle East to join PKK/PYD and Daesh terrorist groups.

"Nearly 9,500 European citizens from 28 EU countries, who attempted to cross to conflict zones and join terrorist organizations like PKK/PYD and Daesh, had a permanent entry ban imposed on them," Soylu said, stressing that France and Belgium were the first two of these 28 EU countries.

Soylu further asserted that Turkey had so far imposed permanent entry bans on 69,967 people from 151 countries.

Turkish troops -- backed by the Free Syrian Army -- liberated large swathes of northwestern Syria from terrorist groups during the Operation Euphrates Shield in 2016, while the Operation Olive Branch dealt a heavy blow to YPG/PKK and Daesh terrorists liberating Syria's Afrin region in early 2018.